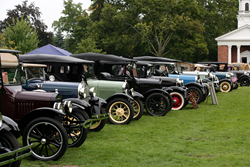 On September 9-10, America’s longest-running antique car show returns to Greenfield Village to immerse guests in the moving stories, sounds and innovations of the early automotive era. This year’s Old Car Festival celebrates the centennial of Lincoln Motor Company and brings to life the eras of American history represented by more than 600 historic vehicles dating from the turn of the century to the Great Depression.

New this year, the Main Street District inside Greenfield Village will transform into a Ragtime-era street fair of the mid-nineteen teens. The fair will include live Ragtime piano music, cake walks, dancing and food stalls filled with smoked turkey legs, hand-carved pastrami sandwiches and specialty lemonade. On Saturday, programming is extended until 9 pm with a special evening performance by the River Raisin Ragtime Revue and a tribute to not only the automobile, but the 100th anniversary of the United States entry into World War One. A fireworks finale will follow the dance and concert, immediately followed by a Dixieland style parade to exit the gates.

During Old Car Festival, guests can join the Grand Army of the Republic (GAR) at Henry Ford Birthplace for a 1910 reunion picnic and learn what veterans of the American Civil War would have thought of the coming automotive age and the impact the organization had across the country in the early 20th century. The Hotel Savarine Society Orchestra will perform jazz and other dance music from the 1920s over at the Ackley Covered Bridge where guests of all ages can learn to dance the Charleston. At the Mattox Farm, guests can join the Reverend Robert Jones for a special Blues performance, see historic farm vehicles and learn how the Great Depression brought the “Roaring Twenties” to a screeching halt. As part of the celebration The Henry Ford will be bringing out the 1896 Quadricycle and 1901 Sweepstakes replicas, its 1917 Woods Mobilette, and in honor of Lincoln Motor Company’s centennial, a 1929 Lincoln Convertible Victoria and a 1917 Liberty V-12 aircraft engine built by the company.

Old Car Festival is free with membership or $27 for adults, $24.50 for seniors 62 and up and $20.25 for youth 3-11. Children two and under are free. Discounted tickets can be purchased at participating Meijer locations. For more information, call (313) 982-6001 or visit https://www.thehenryford.org/current-events/calendar/old-car-festival/.