Are You Ready to Go Over The Edge to Support ABC²’s Brain Cancer Research?

Join other brave participants as they rappel to raise money to advance bold new treatments for brain cancer patients. 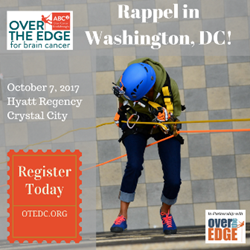 On Saturday, October 7, more than 40 brave participants or “edgers” will show both their fearlessness and their dedication to promoting brain cancer research as they rappel down the Hyatt Regency Crystal City and go Over the Edge for Brain Cancer.

Now in its second year, the annual event has received an overwhelming amount of support from the local community, with over $18,000 already raised. Participants must raise a minimum of $1,500 in order to rappel, and no experience is necessary – just a drive to make a difference!

What: Over the Edge for Brain Cancer is a unique and exciting opportunity in which participants or “edgers” rappel down the Hyatt Regency Crystal City, an 18-story building with breathtaking views of the nation’s capital. Edgers raise a minimum of $1,500 to participate and have 30 days after the rappel to fundraise. All event proceeds benefit brain cancer research.

About ABC² (Accelerate Brain Cancer Cure)
ABC² is focused on speeding the discovery of a cure for brain cancer. By applying an aggressive, venture funding approach not typically seen in the nonprofit sector, ABC² closes current gaps in funding in order to catalyze research and rapidly bring new therapies to patients. ABC² has awarded more than 100 grants totaling $20 million in brain tumor research funding to highly qualified investigators and physician-scientists from 54 institutions and companies. Since its founding in 2001, ABC² has helped bring 30 different treatments into the clinic. To learn more, visit http://www.abc2.org.