Hiller Plumbing, Heating, Cooling & Electrical Ranked Among Inc. 5000's List of Fastest-Growing Private Companies for the 12th time, an honor received by only 15 other companies. 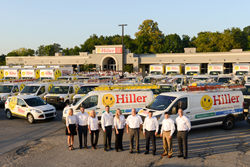 We are honored to be included again on the Inc. 5000 List

Hiller Plumbing, Heating, Cooling & Electrical (Hiller), the region’s premier provider of residential and commercial service and repair, was ranked among Inc. 5000’s List of Fastest-Growing Private Companies in America last week. The 2017 award marks Hiller’s 12th inclusion in the Inc. 5000 List and their 11th consecutive inclusion. Since the list’s inception, there have only been 15 companies to ever make the list 12 times, making Hiller among the top 1% of recipients.

The Inc. 5000 List honors the top privately held companies in America that attain exceptional levels of growth and are “superheroes of the U.S. economy”. With 2016 annual revenues totaling over 97.6 million dollars and 100% growth over the past three years alone, Hiller earned its rank as #4315 of the fastest growing businesses on the list and one of a small segment of 12-time winners.

Launched in 1990 out of a duplex in Antioch, Tennessee, with a single employee and just $500, Hiller has grown to include over 470 trucks, 14 locations, and more than 600 employees across the southeast. In the past decade alone, Hiller has experienced over 900% growth in revenue.

“We are honored to be included again on the Inc. 5000 List”, said Jimmy Hiller, founder and owner of Hiller Plumbing, Heating, Cooling & Electrical. “I believe we maintain our growth, year over year, through our dedication to exceptional service, honesty, integrity, and providing stable career opportunities for the next generation of technicians”.

Hiller’s growth is not their only source of recent recognition. In August, Hiller’s Transition to Trades program, an approved Career Skills Program (CSP) developed by Hiller and U.S. Army Garrison, Fort Campbell to place transitioning soldiers in new careers, announced a national expansion for career placement and received recognition in U.S. Congress for its dedication to serving veterans. Through a partnership with PRAXIS S-10 and PriceFixer.com, a national success college and network for contractors, Transition to Trades now includes placement opportunities with over 150 contractors across the United States. Since its inception, Transition to Trades has proudly graduated 156 soldiers from HVAC, Electrical, and Plumbing trades.

Transition to Trades is an approved program developed by Hiller Plumbing, Heating, Cooling, and Electrical and the U.S. Army Garrison, Fort Campbell. The program, launched on July 5, 2016, allows separating soldiers the opportunity to attend Total Tech trade school (a subsidiary of Hiller, LLC) to learn valuable technical career skills while remaining active duty in the U.S. Army. Total Tech offers a unique approach to technician training through classroom and hands-on laboratory instruction in a 15,000 square foot, state-of-the-art facility. For more information about the program, visit http://www.transitiontotrades.com or e-mail daphne.frontz@happyhiller.com.