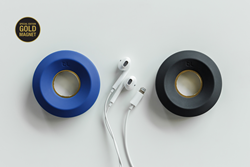 When we launched the new Cableyoyo last year, we had high hopes but were blown away at how quickly the new version caught on. In that spirit, we've decided to drop a limited run, gold edition to honor what's become like an old friend to us.

In celebration of a big hit, Bluelounge is “going gold” with the next release of its Cableyoyo. Putting a new spin on an old classic, in 2016 the company remastered its first product, the Cableyoyo, as an earbud organizing solution. Today, Bluelounge introduces its gold magnet special edition, adding two smart and mod new colors: a blue and a jet-black version.

“When we launched the new Cableyoyo last year, we had high hopes but were blown away at how quickly the new version caught on; not only for it’s utility but for the quirky fun-factor,” said Dominic Symons, Bluelounge Founder and Creative Director. “In that spirit, we’ve decided to drop a limited run, gold edition to honor what’s become like an old friend to us.”

Cableyoyo is the best solution to keep your earbuds neat and tangle-free. Made of a soft, silicone material with a magnet at the center, Cableyoyo is designed to organize, attract and secure your earbuds.

“The magnet is where the magic is,” said Symons. “I was so sick of untangling my earbuds – which are magnetic – so we decided to put a magnet at the center to make sure that even after the cord is spooled, the tiny buds stay put and tangle-free.”

The special edition Cableyoyo with the gold magnet is available in Blue and Black at a suggested retail price of $12.95. The limited run is sold exclusively on Bluelounge.com while supplies last.

Bluelounge is an award-winning, international design studio known for its clever products that solve everyday problems through design.

Each product is designed to provide an effortless solution that stands the test of time and integrates into your life so seamlessly, you can’t remember living without it.

Under the creative direction of Dominic Symons, the Bluelounge team is a vibrant collective that champions ingenuity and embraces creativity to fuel innovation.

Bluelounge is headquartered in Singapore, with studios in Jakarta, Indonesia and Pasadena, California.