Freedom Alliance Given Major Donation in Support of Scholarship Fund 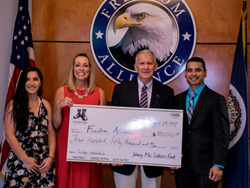 "We are proud to partner with such a great organization," said Freedom Alliance President Tom Kilgannon.

Freedom Alliance, a nonprofit that supports military service members and their families in a variety of ways, recently received a $350,000 donation from Johnny Mac Soldiers Fund. The presentation was held Wednesday, August 23 at Freedom Alliance headquarters in Dulles, Virginia.

Freedom Alliance provides more than $1 million each year in college scholarships to the children of fallen or disabled service members. Since 2003, more than 1,000 students have been provided with financial assistance for college, but more importantly, each scholarship awarded honors the military service and sacrifice of an American hero. Tom Kilgannon, President of Freedom Alliance explained that the organization’s scholarship program “is unique because the only way a student can qualify is through great personal sacrifice for them and their parent.”

The Johnny Mac Soldiers Fund shares the same passion for helping military families. The organization was established in 2014 by a group of West Point graduates and named after fellow classmate, Colonel John “Johnny Mac” McHugh, who was killed in Kabul, Afghanistan on May 18, 2010 by a suicide bomber who attacked his convoy. McHugh was a graduate of the U.S. Military Academy at West Point, served for 24 years in the Army, was a Blackhawk helicopter pilot, a devoted husband and the father of five children. To date, the Johnny Mac Soldiers Fund has honored his legacy by awarding $6 million for college scholarships.

“It is a privilege to partner with Freedom Alliance to fund college scholarships for children of our nation’s fallen or disabled service men and women. It’s our duty – we’re united in that vision at Johnny Mac Soldiers Fund,” commented the organization’s president, MaryEllen Picciuto.

Picciuto presented the check to Freedom Alliance President Tom Kilgannon who commented, “Colonel McHugh was an American hero who dedicated himself to his family and country. His classmates at West Point are doing an amazing job in honoring his legacy and caring for fellow service members in his name. We are proud to partner with such a great organization," said Kilgannon.

Jake Rangel, a Freedom Alliance scholarship recipient, was also on hand for the presentation. Jake is one of 323 students who are currently receiving scholarships from Freedom Alliance and is an example of the impact this kind of assistance makes in the lives of heroes’ children. Jake’s father, SSgt. Ray Rangel, served as a firefighter in the Air Force until he died in Iraq while risking his life to save two soldiers trapped in a Humvee that overturned in a canal. Jake was only 9 years old when he lost his father in 2005. Now, with assistance from Freedom Alliance, he is beginning his senior year at Kutztown University and pursuing a degree in communications. As the Freedom Alliance Student Ambassador this summer, Jake represented scholarship students by traveling and sharing his story with supporters and grateful Americans across the country.

There are an estimated 6,000 children whose fathers lost their lives in Operations Enduring Freedom and Iraqi Freedom who, if they choose to attend college, will be eligible for the Freedom Alliance scholarship. This scholarship is awarded to undergraduate students once per academic year and is renewable for a total of four terms.