Love Yourself ‘Her’ Slated For Release September 18th 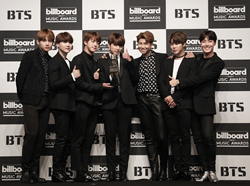 Further information will be provided in the near future via the official BTS Fan Cafe channel.

BTS is cementing their reputation as global pop stars, having recently won ‘Choice International Artist’ at the ‘2017 Teen Choice Awards’ on August 13, 2017 among other worldwide accolades.

Check out the highlight reel for the recently revealed ‘Love Yourself’ series, which is a move forward in creative vision from BTS’ previous reveals from the ‘The Most Beautiful Moment in Life' series and ‘Wings.’ https://www.youtube.com/watch?v=EHdK5U2hf4o