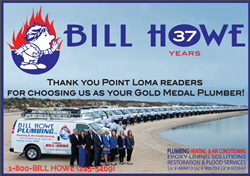 We treat our team well and in turn they take care of our customers, it is how we have continued to remain successful.

Bill Howe was the sole service plumber in Point Loma and other coastal cities when he first began his own company AM/PM Sewer and Drains. Since 1980, the company has grown from just Bill Howe to the Bill Howe Family of Companies in San Diego with Plumbing, Heating & Air, and Restoration Divisions serving the community from the south to the north with five-star customer service and the highest trained technicians.

The Bill Howe Family of Companies has been presented with many awards in their 37-year history for the outstanding services they offer, their dedication to the community, and for innovative leadership. In 2016, they were named as the Best San Diego Plumbing company, Tina Howe was presented with the Connected Women of Influence President’s Award and in August, local readers chose Bill Howe as their Point Loma’s Gold Medal Plumber in the Beach and Bay Press “Best Of” poll.

Beach & Bay Press is the local publication for the coastal communities in San Diego including Point Loma, Ocean Beach, La Jolla, and Pacific Beach. They deliver local news relevant to their communities and each year host the “Best Of” Readers Poll. Readers vote on their favorites and Bill Howe has been on the list for the beach communities multiple years in a row.

“It is always an honor to be recognized by our local communities,” said Tina Howe Vice President of the Bill Howe Family of Companies’. “We started our company in a small beach community and have strong ties there still. We truly appreciate all of our community friends and customers for voting us as their gold medal plumber.”

The Bill Howe Family of Companies has 178 employees across three divisions, many of whom have been with the company for more than 10 years. “We are proud of our team members who have been with us since the early beginnings of the company,” said Bill Howe. “We treat our team well and in turn they take care of our customers, it is how we have continued to remain successful.”

For more information about the Bill Howe Family of Companies, visit http://www.billhowe.com, or to speak with Bill or Tina Howe regarding this announcement, contact Bill Howe Marketing Director, Julie Riddle at Julie(at)billhowe(dot)com.