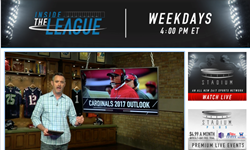 A sample of the diverse and comprehensive live and on-demand programming lineup over the next 10 days on Stadium’s 24/7 digital platform includes:

"We stand alone in our ability and enthusiasm for taking the concept of a television style 24/7 network into a new digital marketplace and aligning our distribution with current fan behaviors and next generation platforms,” said Stadium CEO Jason Coyle.

“We’re excited to be a part of this innovative launch bringing Stadium’s 24/7 sports programming to Twitter,” said Anthony Noto, COO at Twitter. “Sports fans on Twitter will enjoy free access to Stadium’s mix of live sports, live original studio programs and on demand events and be able to join the real-time conversation around this premium content.”

"Watching your favorite team at home with friends and family is probably the next best thing to watching it in person," said Tom Ryan, CEO of Pluto TV. "We're excited to bring all of Stadium's live sporting events to Pluto TV viewers in high definition, streaming for free to connected TV devices nationwide."

In the coming weeks, Stadium Plus programming will also be introduced. Stadium Plus includes over 500 exclusive live games, classic events, and commercial-free Stadium TV re-airs and VOD content for a monthly fee of $4.99.

The over-the-air launch of the 24/7 network is slated for next month. More details on the OTA availability will be announced shortly.

About Twitter (NYSE: TWTR)
Twitter is what’s happening in the world and what people are talking about right now. From breaking news and entertainment to sports, politics, and everyday interests, see every side of the story. Join the open conversation. Watch live streaming events. Available in more than 40 languages around the world, the service can be accessed via twitter.com, an array of mobile devices, and SMS. For more information, please visit about.twitter.com, follow @Twitter, and download both the Twitter and Periscope apps at twitter.com/download and periscope.tv.