Remington focus exhibition tells the provocative story of three of his paintings altered after completion either by the artist or by others. Opening Thursday, Aug. 31, 2017, the exhibition will be on view through Sunday, Sept. 9, 2018. 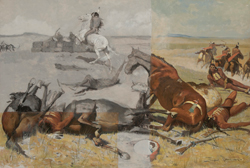 This is an exhibition for anyone who loves a mystery. It’s also an opportunity to see into the mind of an artist and observe the ways in which Remington sought to improve his compositions.

It has been said that perhaps no other American painter has been more copied than Frederic Remington. The Sid Richardson Museum’s exhibition “Frederic Remington: Altered States” tells the provocative story of three paintings from the museum’s collection that were altered after completion — one demonstrates an artist’s change, one demonstrates fraudulency and one remains a mystery — and explores the ways in which scholarship and scientific conservation methods have contributed to the discovery of those alterations.

“Frederic Remington: Altered States” is one in a series of the Sid Richardson Museum’s “Guests of Honor” focus exhibitions that assemble a small selection from the permanent collection with loaned works from other collections. This particular exhibition mines three Remington paintings from the museum’s collection, supported with two loaned books and two loaned bronzes to demonstrate the ways in which the artist and others modified Remington’s work.

“This is an exhibition for anyone who loves a mystery,” says Mary Burke, director of the Sid Richardson Museum. “It’s also an opportunity to see into the mind of an artist and observe the ways in which Remington sought to improve his compositions.”

On exhibition since June 25, 2016, “Legacy” depicts the clash of cultures of the 19th century American West. The legacy of conflicts among cowboys, soldiers, explorers and Indigenous Americans during westward expansion continues to impact America today. Notable additions to the exhibit loaned from private collections include Remington bronzes “The Cheyenne” and “The Broncho Buster,” which was the first of his subjects to be cast in bronze.

About the Sid Richardson Museum

Established in 1982, the Sid Richardson Museum features paintings by Frederic Remington (1861 ‒1909) and Charles M. Russell (1864 ‒ 1926) of the 19th century American West during westward expansion. The legendary Texas oilman and philanthropist, Sid W. Richardson (1891 ‒ 1959), amassed one of the most significant private collections of Remington’s and Russell’s in the United States. In addition to paintings by Remington and Russell, his collection includes works by other "old masters" of Western art who captured the romance and ruggedness of the western United States in the late 1800s, a time when most Americans had little firsthand knowledge of the frontier.

Admission is free to the museum, which is open daily except for major holidays. The museum offers free public education programs for children/families, teens and adults. Docents lead free public gallery tours each Tuesday and Saturday at 2 p.m. Group tours are by appointment only. On the Second Saturday of each month at 3 p.m., the gallery tour is followed by a live performance of a docent portrayed as Nancy Cooper Russell, wife of Charles M. Russell, telling stories about his career. Visitors will find unique Western-themed items in the Museum Store. The museum is located at 309 Main St. in Sundance Square in downtown Fort Worth, Texas 76102. Free valet parking is available in Sundance Square.

The Thunder-Fighters Would Take Their Bows and Arrows, Their Guns, Their Magic Drum, Frederic Remington, 1892, Sid Richardson MuseumOil on wood panel