Author Karen Robertson’s newly released “The Turnaround” tells the misadventures of a forty-year-old school teacher named Grace whose life is about to change forever.

“The Turnaround” from Christian Faith Publishing author Karen Robertson is a series of misadventures surrounding Grace, a forty-year-old school teacher who struggles with an empty marriage. When Grace decides to do something different and take a ride on the Gambler’s express, an unexpected accident leads to a journey filled with deception, double-dealing, dishonesty, drugs, and deliverance. 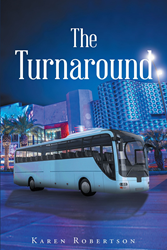 “The Turnaround”: the misadventures of Grace and her trip on the Gambler’s Express. “The Turnaround” is the creation of published author, Karen Robertson, a retired teacher and school administrator whose poetry was first published when she was twelve. After fourteen years of retirement, she was recently hired back as an adjunct Performing Arts instructor teaching Oral Presentation Through Comedy to fifth graders. She also leads the Karen Robertson Historic Downtown Murrieta Walking Fellowship Tour. She is an inspirational speaker, Bible teacher, and stand-up comic. Karen is a member of the Christian Comedy Association. She was a finalist in the 2016 Clean Comedy Challenge at the Ice House in Pasadena, California. She and her husband, Barry, live in Wildomar, California. They have two married children and three grandchildren. Her writing experience includes freelance work for dozens of magazines and newspapers, speech writing, books, birthday jingles, comedies, and hundreds of other fun assignments. Contact her at kanwrite@verizon.net or http://www.SayItWithHumor.com

“The story begins with a news flash that a Gambler’s Special Turnaround bus has careened off the freeway in a dust storm on its return trip from Las Vegas to Southern California. Several passengers are killed, and one Grace Partain is missing in the desert.” --Karen Robertson

Published by Christian Faith Publishing, Karen Robertson’s new book is a series of misadventures filled with twists and turns.

Grace is a forty-year-old school teacher who is struggling with anxiety and a workaholic husband who has no time for her. Her husband, Philip, is a real estate mogul whose only concern is the next big deal. They have no children and their life together is empty. Grace is no gambler, but she hops on the Gambler’s Special in an effort to escape reality for twenty-four hours as she considers the future of her marriage.

Thanks to an unexpected tragedy, Grace is faced with a decision that will change the course of her life and her name while putting her in great danger.
Law enforcement, private investigators, a pastor, a bar maid, an old woman, and two greasy tow truck drivers soon become part of Grace’s turnaround story. She will face deception, double-dealing, dishonesty, drugs, and deliverance with humor sprinkled along the way.

For additional information or inquiries about “The Turnaround”, contact the Christian Faith Publishing media department at 866-554-0919.