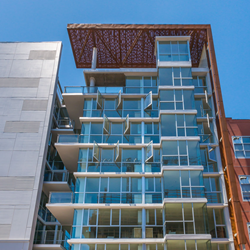 Leasing has commenced at 570 Jessie Street, 47 apartments located in Mid-Market, San Francisco. 570 Jessie is an 8-story residential building which has just been completed. The building consists of 32 studios and 15 one-bedroom units. 6 of the units will be offered at Below Market Rate, in cooperation with the Mayor’s Office of Housing.

Neighborhood amenities include Blue Bottle Coffee, Waystone, Dottie’s True Blue Café, Saint Frank, Frena and Montesacro. Residents will be steps to Civic Center BART, and walking distance to Mid-Market employers such as Square, Uber, Twitter and Zendesk. Two new hotels are planned for the corner of 7th and Market Streets, including the highly anticipated Proper Hotel, which has been designed by Kelly Wearstler. Numerous shopping destinations are within a couple of blocks, including Union Square and Westfield. The location is within proximity to numerous arts and cultural venues, including 1st Amendment, Sketchpad, Golden Gate Theater, Warfield Theater and SHN Theater.

Kory Powell-McCoy, leasing agent for the building, sums it up by saying, “570 Jessie offers the ultimate urban experience. Residents can explore every imaginable urban amenity, simply by leaving their front door.”

The newly released apartments have been thoughtfully designed and feature high-quality finishes such as wide-plank oak floors, Container Store closets, Bosch appliances, Caesarstone counter tops, soft-close cabinetry, Kohler sinks, Grohe faucets and Duravit soaking tubs. The model units have been expertly furnished by West Elm, to give future residents an idea of furniture layouts. The open floor plans feature walls of glass with outlooks to Downtown. Many of the units have private outdoor space, some as large as 300 square feet.The building was designed by Handel Architects. Architectural features include a large vertical recess containing balconies in an alternating pattern, allowing natural light to filter into the building. A signature “wrapper” element, made of perforated corten steel, begins as a canopy over the lobby entrance, continues vertically along the side elevation, and returns in horizontal form as a dramatic floating plane capping the building.Studios start at $2,650 and one-bedrooms start at $3,500.

Move-ins are scheduled for September. Leasing has commenced, and potential residents may contact Vanguard Properties, the exclusive firm representing the property, at 415-752-5700 or contact(at)570Jessie(dot)com.

To learn more about the apartments, visit http://www.570Jessie.com.