Ruumi’s cup lid design features a smart recess for the nose that eliminates nose bumping and head tilting. This innovative feature minimizes sipping-related distractions by freeing drivers to keep their eyes on the road, while also increasing overall comfort. 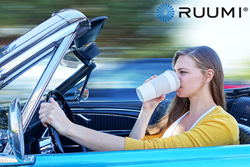 Eyes stay on the road with Rummi Cup

Seattle-based company Ruumi believes it’s found a safer way to drink coffee behind the wheel. Its patented cup lid design features a space for the nose, eliminating the need to tilt the head back while sipping. This allows drivers to keep their eyes straight ahead, down to the last drop.

Sipping beverages on the road can become a secondary traffic offense according to Washington state’s distracted driving law, which took effect in July. That means if drivers are pulled over for a separate traffic violation, they can be fined up to $100 extra if they engaged in other non-driving related activities like drinking from a cup. This new law, which is being considered by other states and municipalities across the country, has drivers thinking twice about their morning coffee ritual.

When does drinking coffee become a driving distraction that interferes with the safe operation of a motor vehicle? Ruumi asserts it’s not the sipping itself, but the tilting back of the head when the lid comes into contact with the nose. This narrows the field of vision to the point where visual contact with the road is lost. Practically all reusable and disposable cups on the market require this method of drinking, which directly relates to the lid design.

To combat this problem, Ruumi has invented a lid with a central recess generous enough to fit any nose, eliminating the need to tilt the head back while sipping. Designed to fit the contours of the face, it frees the nose from continually hitting the lid each time the cup is raised. As the cup tips upward, the head remains level with the ground.

Ruumi’s design inherently alleviates another concern about sipping on the go—spills. The unique cavity in the lid acts as a breakwater to help reduce splashing through the sip hole when the cup is jolted by bumpy road, sharp turns or frequent stops. Carefully-sized compartments absorb sloshes, and spills are reduced by up to 50%. Despite these added protections, the Ruumi Cup itself allows for the same volume of liquid as you’d find in a traditional cup.

Invented by a rocket scientist who grew tired of cumbersome travel drinkware, the current design has been perfected over the years by refining it to an optimal shape. Ruumi already offers low-distraction travel mugs on its website and is currently in the process of producing similar disposable lids for use in coffee shops nationwide. Not only does Ruumi believe their lids are safer, they’re designed to make sipping on the go feel as comfortable as sipping from an open cup, a benefit in the car and everywhere.

Presented in a minimalistic, classic design, the Ruumi Cup can be securely ordered online at ruumicup.com. The company hopes its face-accommodating feature and added spill protection will make sipping behind the wheel more comfortable and less dangerous. It’s an added protection for a favorite American tradition drivers don’t want to part from.