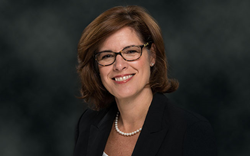 “It was not difficult to recognize the work of Christina Cassotis, our 2017 Director of the Year in the medium airports category,” says Ramon Lo, publisher of Airport Revenue News. “The remarkable air service turnaround during Christina’s relatively short tenure may not match its past as a hub, but it has reinvented the airport into an active O&D facility that is propelling it to a better future.”

Since Cassotis’ arrival in January 2015, PIT has steadily increased flights domestically due to carriers such as Delta Air Lines, Jetblue, Allegiant Air, Southwest Airlines and Spirit Airlines, and grown international service to markets such as Reykjavik, Paris, Frankfurt, and plans for a regional first, China. The increase in service for what was once a U.S. Airways hub has resulted in 14 straight months of passenger growth, with June and July being the busiest months to date since 2007. Additionally, the airport has partnered with Plug And Play, a Silicon Valley firm that invests in technology startups and pairs them with corporations. The move will allow PIT access to new innovations designed to improve customer service. Nationally, Cassotis has been an advocate for the airport industry, testifying before Congress about the need for infrastructure improvements and the funding challenges of medium-sized airports like PIT.

Cassotis’ career in airports started at the Massachusetts Port Authority, where she was deputy director of communications. From there she joined consulting firm SH&E, where she was first a director and then the managing officer for global aviation. SH&E later merged to become ICF-SH&E. Cassotis joined the Allegheny County Airport Authority in January 2015. Cassotis holds a Master of Business Administration degree from the Massachusetts Institute of Technology Sloan School of Management and a bachelor’s degree from the University of Massachusetts.

Cassotis will be interviewed in and featured on the cover of ARN’s October issue. She will be presented this award at the ARN Awards Show on the final night of the ARN 2018 Revenue Conference & Exhibition in Orlando. For more information about the conference, please go to http://www.arnconference.com.