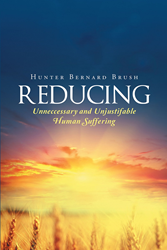 “Reducing Unnecessary and Unjustifiable Human Suffering”: a profound message that can change the world. “Reducing Unnecessary and Unjustifiable Human Suffering” is the creation of published author, Hunter Bernard Brush. Hunter Bernard Bush was born in Tyler, Texas in 1934. During his senior year at Tyler High School, he was elected president of Tyler’s Young Life Club. After graduating from Texas Christian University in 1955, he served as a minister of the First Christian Churches in Walnut Springs and Whitesboro. He later graduated from Southern Methodist University’s Law School. Returning to Tyler, he served as an assistant district attorney for Smith County. He was elected criminal district attorney and served a four-year term. After his term, he spent eight years designing and building Garden Valley Golf Course and Resort. During the ensuing years, he served on the Board of the Disciples of Christ (Christian Church) for Texas and New Mexico. During that service, he was also chosen to be the board’s representative to the Texas Conference of Churches. Eight years after his retirement from the DA’s office, he was again elected to serve another four-year term as the criminal district attorney for Smith County. He also served on the Board of Trustees for Jarvis Christian College from 1968 until 1988, serving as Chairman for the last sixteen years.

“The preface and the Message attempt to prepare the reader for what is to follow: The Messages of Mark, Mathew, Luke, and John.” --Hunter Bernard Brush

Published by Christian Faith Publishing, Hunter Bernard Brush’s new book has a message of hope for readers. It is the same message of Mark, Mathew, Luke, and John. Readers may find the discussion within uncomfortable, but they must be committed to the task at hand. They must examine the content within to be prepared. They must learn to fully appreciate the observations, the postscript, and reflection found within the pages of “Reducing Unnecessary and Unjustifiable Human Suffering.”

View a synopsis of “Reducing Unnecessary and Unjustifiable Human Suffering” on YouTube.

For additional information or inquiries about “Reducing Unnecessary and Unjustifiable Human Suffering”, contact the Christian Faith Publishing media department at 866-554-0919.