“GOD-JESUS-WILD HORSES” from Christian Faith Publishing author Michael Lee Johnson is a narrative that revives the feelings and thoughts of the author as he recounts years of abuse at the hands of his own father. Through it all, his father could never break his spirit thanks to God, Jesus Christ, and Wild Horses. 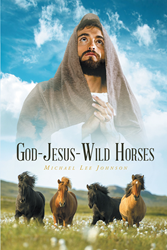 “GOD-JESUS-WILD HORSES”: a chronicle of the abuse endured by the author and his unbreakable spirit. “GOD-JESUS-WILD HORSES” is the creation of published author, Michael Lee Johnson. Michael Lee Johnson is a U.S. Army combat veteran who grew up in Southeastern Oklahoma. He became a welder and fabricator after his tour in Vietnam. He worked on land and offshore oil rigs. Symptoms of post-traumatic stress disorder interfered in his daily life to the point it became necessary for Michael to seek inpatient treatment. Numerous inpatient stays did little to relieve the intrusive thoughts, nightmares, and general anxiety felt by this veteran due to the underlying issues that were never treated, namely his horrific childhood experiences. In October of 2015, he began his first treatment session for childhood related issues. He currently resides in Northeastern Illinois with his family. His free time is spent fishing, metal detecting, and reading as well as enjoying his other passions. Mr. Johnson is fortunate enough to live in an area surrounded by lakes, so he is able to spend his days catching Bass and Northern pike. His metal detector works underwater to a depth of three hundred feet, which provides numerous opportunities for treasure hunting.

“My therapist asked me to write down my thoughts and when I started, I could not stop. I wrote and wrote and the more I wrote, the more memories and intrusive thoughts would come to mind. It was as if I didn’t have any choice in this matter, I had to get the thoughts out of my head and onto paper; otherwise, I was sure I would go completely insane. The more I wrote, the more I was encouraged by my treatment team to publish my writings. My primary goal in publishing is to help others that did go through similar experiences and/or to help those that are currently being abused.” --Michael Lee Johnson

Published by Christian Faith Publishing, Michael Lee Johnson’s new book is a narrative chronicling the abuse of a young boy and his unbreakable spirit.

“God-Jesus-Wild Horses” is not a typical story. It is a culmination of the author Michael Lee Johnson’s thoughts and feelings during his first year of intense psychotherapy for childhood-related post-traumatic stress disorder. He endured psychological, physical, and sexual at the hands of his own father. He was raised to honor thy father and mother, so he did not fully comprehend that what his father was doing was wrong. Michael felt his father, because he was his father, had the right to treat him as he pleased.

Michael thought his punishments were warranted, because he could not do anything right. He thought he had a defective brain. The person who was put on Earth to love and care for him did not just abuse him. His father tortured him using any and all means that were available to break his spirit. His belief in God, Jesus, and wild horses gave Michael the strength to survive the torture and humiliation. His father never did break his spirit, because God, Jesus, and wild horses were always there for him when he needed them the most.

For additional information or inquiries about “GOD-JESUS-WILD HORSES,” contact the Christian Faith Publishing media department at 866-554-0919.