“We Three” from Christian Faith Publishing author Paul Anderson tells the adventures of a party animal who finds his purpose when he meets two homeless men. By helping others and trying to make the world a better place, the trio will have an amazing adventure across the United States. 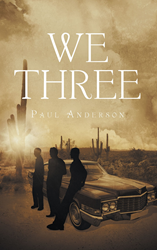 “We Three”: a wild adventure about a party animal who found purpose in helping others. “We Three” is the creation of published author, Paul Anderson. Paul Anderson was born in Minnesota and raised with a plan to join the military after high school. His plans changed when physical issues prohibited a military career and his second choice of becoming an auto mechanic sent him off to trade school. Several years after successfully completing trade school, a severe allergy to petroleum forced him out of his profession. He spent the next few years traveling around the United States. “We Three” is very loosely based on the adventures he experienced during those years.

Published by Christian Faith Publishing, Paul Anderson’s new book is loosely based on the adventures of the author as he spent years roaming the United States.

When a party animal awakens in a strange place after a particularly heavy night of partying, he meets an unusual pair of homeless men. They invite the young man to join their quest as they try to make the world a better place. In giving his life to others, he quickly finds purpose and sobriety. As they bounce from one wild state of affairs to another, they help a cavalcade of often colorful characters.

Consumers can purchase “We Three” at traditional brick & mortar bookstores, or online at Amazon.com, Apple iTunes store, Kobo or Barnes and Noble.

For additional information or inquiries about “We Three”, contact the Christian Faith Publishing media department at 866-554-0919.