Little League Baseball has added another bronze sculpture to the "Bases Loaded" project in Williamsport, PA. Big Statues was commissioned to create this project which started back in 2014. 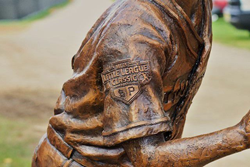 Unveiled this past week during a ceremony at the entrance to the 91-year-old ballpark, “Bases Loaded” features 10 bronze statues at Market Square representing Little League players.

Commissioned by the Lycoming County Visitors Bureau and created by artist Matt Glenn, of Provo, Utah, it is another installment of the project released in 2014 and will end in 2021.

Big Statues has worked tirelessly on this project each year to produce high quality and memorable bronze statues that have come together over the years to create a beautiful and meaningful story for all to see.