Leaders of SPIE, the international society for optics and photonics, were on hand to celebrate the election of Roberta Ramponi, Politecnico di Milano, as President along with other new officers of the International Commission for Optics (ICO) in Tokyo this week. The Emperor and Empress of Japan were present for the opening of the conference, organized by a committee headed by Yasuhiko Arakawa of the University of Tokyo. 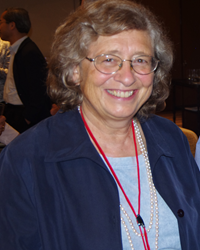 Roberta Ramponi (IFN-CNR) will be the next ICO President.

The high-quality presentations and the presence of so many of the world’s leaders were impressive.

Leaders of SPIE, the international society for optics and photonics, were on hand to celebrate the election of new officers of the International Commission for Optics (ICO) in Tokyo this week during the highly successful ICO24 conference that opened with the Emperor and Empress of Japan present. SPIE is an International Society Member of the ICO.

She succeeds Yasuhiko Arakawa of the University of Tokyo, who led the organizing committee of the conference, held 21-25 August with the theme of “Science for Society.”

SPIE Fellow Carmiña Londoño of the U.S. National Science Foundation was selected as the SPIE appointed vice president. She succeeds SPIE Past President María Yzuel (Universidad Autónoma de Barcelona), an active advocate and supporter of optics and optics education through work with the ICO, SPIE, ICTP, Royal Society of Spain, and other organizations.

“The presence of the Japanese Emperor and Empress at the opening ceremony was a strong indication of the high regard in Japan for the field of optics and photonics and for its economic and social importance,” said SPIE CEO Eugene Arthurs. “The high-quality presentations and the presence of so many of the world’s leaders were impressive. Professor Arakawa deserves strong praise for organizing an event that very compellingly demonstrated why this science is so valuable to society.”

Two SPIE Fellows were among luminaries who gave plenary talks.

Recognition of student work, in the form of Best Student Paper Awards to 18 participants, was supported by SPIE and The Optical Society (OSA).

SPIE also supported expenses for Olivier Kossan Bangui, a professor at the Institut National Polytechnique Félix Houphouët-Boigny in the Ivory Coast, to enable his participation in the conference.

SPIE Past President Katarina Svanberg (Lund University Hospital and South China Normal University) was instrumental in making that happen, Arthurs noted. In addition to her own clinical and research work, Svanberg actively works in programs throughout Africa in particular and in other areas to train and expand the networks of optics and photonics scientists with otherwise limited opportunities.

Among awards presented during a gala banquet were the 2015 ICO Galileo Galilei Award to Aram Papoyan from the National Academy of Science in Armenia, who presented on “Selective reflection of light as a spectroscopic tool”; and the 2014 ICO Prize to Martin Booth of the University of Oxford.

Also attending were ICO vice presidents and SPIE Fellows Mourad Zghal of the Higher School of Communications of Tunis (SUP'COM) and Seung-Han Park of Yonsei University, and SPIE board member and Fellow David Sampson of the University of Western Australia.

SPIE is the international society for optics and photonics, an educational not-for-profit organization founded in 1955 to advance light-based science, engineering, and technology. The Society serves nearly 264,000 constituents from approximately 166 countries, offering conferences and their published proceedings, continuing education, books, journals, and the SPIE Digital Library. In 2016, SPIE provided more than $4 million in support of education and outreach programs. http://www.spie.org