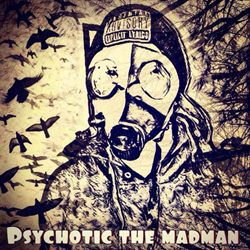 About Psychotic The Mad Man: Born and raised in Omaha, Nebraska Psychotic The Mad Man has always had a passion for music. With his eccentric personality and ability to write flawless poetry, he channeled those talents and by the time he was 8 years old he was already putting together his first songs. Coming from a broken home, he was adopted at the age of 6 and was homeless by the age of 17. Jumping from shelter to shelter, he soon fell into a downward spiral consumed by drugs and his mental illness. At the age of 18 he had already been to jail on a number of occasions, and trouble would only follow him in his years to come.

From being addicted to drugs, being bullied, hazed and homeless the one thing that he never gave up was his talent for writing lyrics. And through everything he has experienced his spark has never died out.