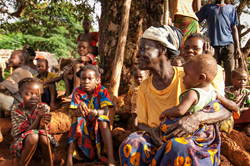 Mercy Corps and other international organizations believe the situation is not hopeless, but that it’s at a critical tipping point that demands immediate action

The global organization Mercy Corps reports that its team members are no longer able to access programming in the villages of Nièm and Yéléwa in Central African Republic as local militias have gained authority and created extremely unsafe working environments for humanitarians – and even more dangerous conditions for the families living there. An estimated 30,000 people live in the two villages.

The curtailing of operations highlights a worsening crisis that has blocked humanitarian access in CAR and in some cases driven out aid groups all together. Nearly half of the country’s population is dependent on humanitarian aid to survive.

Mercy Corps joins other organizations working in CAR to implore the United Nations and the United States to take immediate action to increase engagement in CAR and assist aid groups, in partnership with institutions such as the World Bank and European Union.

A recent statement from the aid community warned that the momentum toward peace and stability after the 2016 elections is quickly dissipating. “The risk of mass atrocities remains high,” write the signatories. In the last 12 months, armed groups have gained control of significant parts of the country.

Local militia violence in May created lasting ripple effects for Mercy Corps and other organizations working in the region – including increased displacement and fatal violence that has orphaned many children. In Yéléwa, Mercy Corps identified as many as 130 orphans living with host families in July. The area is just one of many such impacted communities across the country.

Since 2014, Mercy Corps has implemented a community-led peace-building initiative in CAR that has significantly helped mediate long-standing community tensions. Mercy Corps’ programming in Nièm and Yéléwa encompasses social-cohesion programs that help communities heal grievances and work together. The organization also provides psychosocial support for vulnerable people that have experienced events such as intercommunal conflict, rape or domestic violence.