Tadpoles were emergency-airlifted last summer to Oakland Zoo to be raised and released back into their natal lakes as healthy adult frogs in hopes of restoring their dwindling population in the wild. 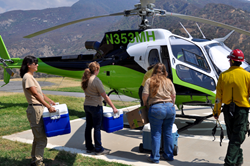 Oakland Zoo, San Francisco Zoo, National Park Service, and U.S. Fish and Wildlife Service partnered for a third year in efforts to save the endangered mountain yellow-legged frog from extinction in the wild.

About half of the critically-endangered frogs that were released were raised at Oakland Zoo, in quarantine from tadpoles, as part of a “head-start” program to help ensure their survival in the wild. In the wild, these frogs are victim to non-native predators and the deadly chytridiomycosis (chytrid) fungus, a highly-infectious, deadly disease that has caused the decline or extinction of more than 200 of the world’s amphibian species in recent decades. The program involves growing the tadpoles into healthy juveniles and inoculating them to boost their immune response to the fungus.

The fungal disease has been present in Asia, South America, and Africa for approximately a century, but has spread to almost every continent in recent decades, likely due to the worldwide exportation of amphibians.

Oakland Zoo raised 99 of the 215 healthy young frogs (from tadpoles) that were transported by helicopter and released into lakes in Sequoia and Kings Canyon National Parks over the past two weeks.

“Our collaboration with biologists and several government agencies has given us the opportunity to inoculate these frogs against the deadly disease that has already wiped out 90% of this species in the wild. We are honored to be able to make a real difference in the conservation of this species,” said Margaret Rousser, Zoological Manager at Oakland Zoo.

The release indicates the success of the program, now in its third year and ongoing. The program looks to continue and succeed as other groups of tadpoles are salvaged and brought to Oakland Zoo for more head-starting next month.

The Mountain Yellow-Legged frog has been listed as endangered by the International Union for Conservation of Nature, or IUCN, since 2014.

“This partnership has been critical to the recovery of the mountain yellow-legged frog,” said Sacramento Fish and Wildlife Office Field Supervisor Jennifer Norris, Ph.D. “We’ve been able to maximize the expertise of each partner to successfully recover and relocate over 400 frogs over the past couple years alone.”

“These frog reintroductions are the result of close collaboration and effort by many partners,” said Danny Boiano, Aquatic Ecologist at Sequoia and Kings Canyon National Parks. “However, the expertise provided by the zoos has been instrumental to the success of being able to return so many frogs to the wild.”

The conservation collaboration between the National Park Service, the U.S. Fish and Wildlife Service and zoos is helping to save a native California species and give it the opportunity to thrive and repopulate in the wild. Seeing flourishing frogs in healthy habitats is the ultimate goal of the rescue for recovery, so future generations are able to experience and learn about these animals first-hand.

ABOUT MOUNTAIN YELLOW-LEGGED FROGS:
The mountain yellow-legged frog complex in the Sierra Nevada is comprised of two species (Rana muscosa and Rana sierrae) that inhabit high elevation aquatic habitats. Although historically abundant, these frogs have been extirpated from more than 92 percent of their geographic ranges, with many of the remaining populations depleted. Declines were first recognized during the 1970s and have accelerated markedly since the 1990s. The realization that these patterns would rapidly place these species at risk of extinction led to Endangered listings for both species under the U.S. Endangered Species Act. Mountain yellow-legged frogs in the Sierra Nevada occur between the headwaters of the Feather River and the headwaters of the Kern River. Rana sierrae occupies the northern and central Sierra Nevada south to the vicinity of Mather Pass (Fresno County), whereas Rana muscosa occupies the Sierra Nevada south of this area.

ABOUT OAKLAND ZOO:
The Bay Area's award-winning Oakland Zoo is home to more than 700 native and exotic animals. Oakland Zoo is dedicated to the humane treatment of animals and wildlife conservation onsite and worldwide; with 50¢ from each ticket donated to support conservation partners and programs around the world. California Trail, a transformational expansion, opens in 2018 and will further our commitment to animal care, education, and conservation with a focus on this state’s remarkable native wildlife. Nestled in the Oakland Hills, in 500-acre Knowland Park, the Zoo is located at 9777 Golf Links Road, off Highway 580. The East Bay Zoological Society (Oakland Zoo) is a nonprofit 501(c)3 organization supported in part by members, contributions, the City of Oakland and the East Bay Regional Parks.

ABOUT THE U.S. FISH & WILDLIFE SERVICE:
The mission of the U.S. Fish and Wildlife Service is working with others to conserve, protect, and enhance fish, wildlife, plants, and their habitats for the continuing benefit of the American people. We are both a leader and trusted partner in fish and wildlife conservation, known for our scientific excellence, stewardship of lands and natural resources, dedicated professionals, and commitment to public service.

ABOUT THE NATIONAL PARK SERVICE:
The fundamental purpose of the National Park Service is to conserve the scenery and the natural and historic objects and the wild life therein and to provide for the enjoyment of the same in such manner and by such means as will leave them unimpaired for the enjoyment of future generations. The mission of Sequoia and Kings Canyon National Parks is to protect forever the greater Sierran ecosystem - including the sequoia groves and high Sierra regions of the parks - and its natural evolution, and to provide appropriate opportunities to present and future generations to experience and understand park resources and values.

Frogs being released into natal lakes