According to JunkBunk, London is on track to becoming one of the worst cities for waste recycling

London’s waste recycling policy is still in a declining state. JunkBunk provides statistics, examines the ‘why’s of the problem, and offers some of the ‘how’s to a possible better tomorrow. 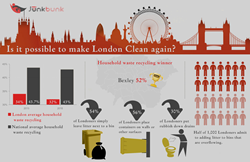 It seems that London is rubbish at recycling. For the last two years (from 2015 to 2016) the average household waste recycling in London was only 32%. Not a great statistic compared to the national average of 43%. And things are only going worse.

The four British worst councils at recycling are all in London. The names are: Newham, Lewisham, Westminster, and Barking & Dagenham. In the other corner is Bexley, closely followed by Bromley. Bexley is the victor with 52% of household waste recycling.

However, Bexley is a part of a bigger problem. Its numbers actually came down from 54%, which goes to show that the average recycling rate in London really grows worse with every year. The city’s average percentage now sits at only 32%, while in 2012 it was 34%. When it comes to the average statistics of a city this big, 2% is not a small number.
It’s not just the city. London is not alone in the downward spiral. England went down from 43.7% of waste being recycled, to the mere 43%.

Litter and the River Thames

Every year tonnes of litter (around 300) are scooped out of the River Thames. Much of it is not actually caught and is being swept out to sea, adding to the waste in the oceans. Litter is harming the local environment as well. A study by the Royal Holloway University uncovered that 70% of fish from the River Thames has plastic fibres inside them.
Many people don’t think that litter comes from their daily habits or routines. A recent polling reveals that every second Londoner admits to adding litter to bins that are clearly overflowing. There are also a lot of cases where Londoners simply leave litter next to a bin (54%), place containers on walls or other surfaces (56%), put rubbish down drains (30%).

This is quite alarming and Londoners need to start thinking for the future, not just where to dispose of their rubbish quickly.

This article is provided by JunkBunk Ltd. – a rubbish removal company based in London which cares for the environment.