Juntendo University Research: Visual recognition in the brain is more than meets the eye

Cognitive neuroscience research on non-human primates demonstrated that judgments of whether humans have previously seen or not seen an object are causally determined by neuronal signals generated in the temporal cortex of the brain. The findings are published in Science (August 2017). 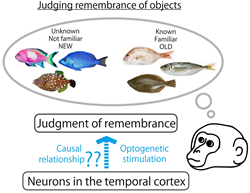 People in Japan would judge the fish widely eaten in Japan (right) as more familiar than the tropical fish (left).

Cognitive neuroscience research on non-human primates demonstrated that judgments of whether humans have previously seen or not seen an object are causally determined by neuronal signals generated in the temporal cortex of the brain. The findings are published in Science (August 2017).

“We daily encounter hundreds of visual objects and instantaneously evaluate whether they are safe or dangerous, friendly or hostile, delicious or toxic, or never seen before,” explain Yasushi Miyashita and colleagues at the University of Tokyo School of Medicine and Juntendo University Graduate School of Medicine. While previous studies had shown that visual object memory is related to an area of the brain known as the perirhinal cortex, it was not understood whether and how the neurons in this area causally function in such evaluation (Fig.1).

These results suggest that perirhinal neurons do convey a non-physical attribute informing that the encountered object was learned in the past. The researchers propose a possible causal model for the object recognition based on the existence of neurons that selectively respond to specific memorized objects. In that model, the object viewed is deemed old when the activity of these neurons was elevated to reach a certain threshold, while the object is deemed new when the activity failed to reach the threshold.

Another approach, optogenetic stimulation, involves genetic engineering of certain types of neurons to express microbial proteins that respond to the light of particular wavelength. The genetically modified neurons then become responsive to the light at this wavelength. A major advantage of optogenetic stimulation is that genetically-defined types of neurons can be selectively manipulated.

Details of optogenetic and electrical stimulation in the perirhinal cortex

In the current study, the researchers identified OLD object-responsive neurons that significantly increased their firing rate when the monkeys were shown specific OLD object images.

To optogenetically stimulate the neurons of the perirhinal cortex, the researchers injected a virus carrying a gene of a light-sensitive protein conjugated with yellow fluorescent protein into the perirhinal cortex. The efficiency of gene expression and neuronal responses to light were confirmed in task-performing monkeys by fiber-optic fluorescence measurements and electrophysiological recording, respectively. The spatial extent, efficiency, and cell-type specificity of the gene expression were gauged by histological analysis.

For the behavioral test, monkeys were shown an image from 20-30 memorized OLD objects, or from 6,000 not-memorized NEW objects with varying levels of pixelated obstruction, and judged whether the presented object was OLD or NEW. Comparison of optogenetic and electrical stimulation showed that optogenetic stimulation that activates output neurons increased the probability of OLD choice regardless of whether or not the stimulated neurons coded OLD objects, while electrical stimulation that activates both output and inhibitory neurons increased or decreased the probability of OLD choices depending on whether or not the stimulated neurons coded OLD objects. The researchers suggest that how the two types of stimulation methods activate different types of neurons may be responsible for this dissociation. The precise mechanisms remain to be further investigated in future studies.

Implications of the current study

Mission Statement
The mission of Juntendo University is to strive for advances in society through education, research, and healthcare, guided by the motto “Jin – I exist as you exist” and the principle of “Fudan Zenshin - Continuously Moving Forward”. The spirit of “Jin”, which is the ideal of all those who gather at Juntendo University, entails being kind and considerate of others. The principle of “Fudan Zenshin” conveys the belief of the founders that education and research activities will only flourish in an environment of free competition. Our academic environment enables us to educate outstanding students to become healthcare professionals patients can believe in, scientists capable of innovative discoveries and inventions, and global citizens ready to serve society.

About Juntendo
Juntendo was originally founded in 1838 as a Dutch School of Medicine at a time when Western medical education was not yet embedded as a normal part of Japanese society. With the creation of Juntendo, the founders hoped to create a place where people could come together with the shared goal of helping society through the powers of medical education and practices. Their aspirations led to the establishment of Juntendo Hospital, the first private hospital in Japan. Through the years the institution’s experience and perspective as an institution of higher education and a place of clinical practice has enabled Juntendo University to play an integral role in the shaping of Japanese medical education and practices. Along the way the focus of the institution has also expanded, now consisting of four undergraduate programs and three graduate programs, the university specializes in the fields of health and sports science and nursing health care and sciences, as well as medicine. Today, Juntendo University continues to pursue innovative approaches to international level education and research with the goal of applying the results to society.