Earlier this week the album, Lead Me Home, spent time in the New Age category at No. 1 on iTunes and Amazon. 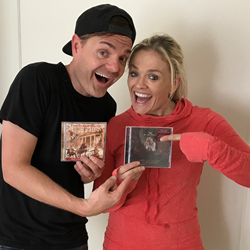 Every single person played an integral part in this collaborative project and it’s truly an album close to my heart.

Camille Nelson, a musician specializing in acoustic-driven folk music, recently released a new album that debuted no. 8 on Billboard Magazine’s Classical Crossover Chart. Earlier this week the album, Lead Me Home, also spent time in the New Age category at No. 1 on iTunes and Amazon. This is Camille’s first full-length studio album with Stone Angel Music and was released on August 18. Accompanied by a string ensemble with guest artists, Alex Sharpe (formerly of Celtic Woman), her brother Steven Sharp Nelson of The Piano Guys and Ryan Shupe of Ryan Shupe and the Rubberband, Lead Me Home blends elements of folk, classical, bluegrass, and new age music.

“Every single person played an integral part in this collaborative project and it’s truly an album close to my heart,” said Nelson. “Integrating emotive, reminiscent, and peaceful melodies, I feel this album captures that genuine essence of what it means to be home.”

Camille also recently released her latest music video from Lead Me Home, “Nearer My God to Thee.” Filmed at Tibble Fork Reservoir in American Fork Canyon, “Nearer My God to Thee” is a serene music video capturing the peace and naturalness of its surroundings. Shot by Elias Jessop, this music video was inspired by everyday people whose answers from the question, “What Brings You Nearer to God?” were captured and included in the video to help others think about what brings them nearer to God.

In 2009, Camille collaborated with Nashville producer Giles Reaves to release her debut album, First Words, under the independent label known as Dimmi Records. Camille later earned a publishing contract for more expansive television and film placement. Camille signed with Paul Cardall’s label, Stone Angel Music in early 2017 and worked with Trevor Price as the engineer and producer of Lead Me Home.

Camille was born and raised in Salt Lake City, Utah in a musical family. With the recent release of Lead Me Home, she is currently on the Billboard charts with her older brother, Steven Sharp Nelson of The Piano Guys. Incidentally, Camille shares the prestigious Billboard chart with her brother’s group who took the No. 1 spot in the same category.

Lead Me Home is now available for purchase on iTunes, Amazon, Deseret Book, and streaming on Spotify. For more information on Camille Nelson, please visit http://www.camillenelson.com.

About Camille Nelson
Camille Nelson is a musician specializing in acoustic-driven folk music. Classically trained in guitar and violin, Camille creates fresh and kinetic melodies combined with unique guitar percussion. These compositions convey elaborate and heartfelt stories using the entirety of her instrument. Her songwriting style has been influenced by artists from U2 to Brahms, while her playing style reflects influences from fingerstyle artists, Kaki King and Andy Mckee. Her audiences are introduced to elements of classical string arrangements with atmospheric guitars and vocals for a modern edge.