Latest America the Beautiful Quarters(R) Program coin pays homage to Ellis Island, historic entry point to America for millions of immigrants from 1892 to 1954. 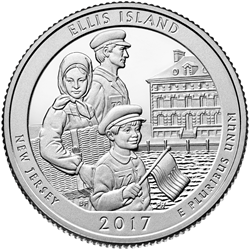 The quarter’s reverse design depicts an immigrant family approaching Ellis Island with a mixture of hope and uncertainty. The hospital building on the New Jersey portion of Ellis Island is visible in the background.

“This new coin not only honors the unique history of the largest and most active immigration station in the United States, but also the spirit and determination of the millions of people seeking a better life in America,” said Todd Baldau, senior advisor to the Acting Deputy Director of the Mint.

“It’s incredibly fitting that the State of New Jersey chose Ellis Island for inclusion in the United States Mint’s America the Beautiful Quarters Program,” said Secretary of the Interior Ryan Zinke. “The National Park Service is a proud steward of this remarkable landmark that tells an important story about what it means to be an American and our history as a beacon of liberty to the world.”

After the ceremony, the Mint held its customary coin exchange where attendees traded cash for $10 rolls of newly-minted Ellis Island quarters. Product options containing the new quarter may be purchased directly from the Mint via its online catalog at http://www.catalog.usmint.gov or by calling 1-800 -USA-MINT (872-6468).

From 1892 to 1954, Ellis Island processed 12 million immigrants. On average, the inspection process took approximately three to seven hours per person. Approximately 1.25 million hopeful immigrants spent anywhere from a few days to a few months in the hospital complex before being allowed to settle in America. It was here that they received their first impression of the United States from the care and compassion that was extended to them by the staff at the Ellis Island immigrant hospital.

Save Ellis Island, Inc., is the official partner of the National Park Service in the effort to preserve the hospital complex on Ellis Island. Its goal is to ensure that the contributions, values, concepts, discoveries, and stories of Ellis Island are reinvigorated and remembered.

The Ellis Island quarter is the 39th release in the Mint’s America the Beautiful Quarters Program, a 12-year program that honors 56 national parks and other national sites authorized by Public Law 110-456, the America’s Beautiful National Parks Quarter Dollar Coin Act of 2008 (Act). Each year, the public will see five new national sites depicted on the reverses (tails sides) of the America the Beautiful Quarters coins. In accordance with the Act, the Mint is issuing these quarters in the order in which the national sites were officially established.

About the United States Mint
The United States Mint was created by Congress in 1792 and became part of the Department of the Treasury in 1873. It is the Nation's sole manufacturer of legal tender coinage and is responsible for producing circulating coinage for the Nation to conduct its trade and commerce. The Mint also produces numismatic products, including proof, uncirculated, and commemorative coins; Congressional Gold Medals; and silver, gold, and platinum bullion coins. Its numismatic programs are self-sustaining and operate at no cost to taxpayers. The Mint is celebrating its 225th anniversary this year (#USMint225).