Back To School With Carnegie Council's Expanded Online Education Section 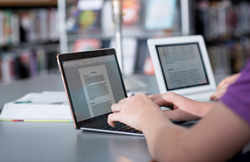 The newest Carnegie Council worksheets on contemporary events match the curricula of U.S. and Comparative Government courses. They focus on issues such as populism, freedom of speech, and immigration and state sovereignty.

For the third summer running, Carnegie Council's Education Fellow Elena Shanbaum has returned to expand the Council's online Education Section, which provides materials for both high school and college classrooms. A teacher herself, Shanbaum has added 15 new worksheets especially designed for educators, all of which are in .doc format for easy modifications.

"This year, as well as adding to the Council's collection of worksheets and short videos on contemporary foreign policy issues, we dove into our archives and uncovered primary resources from 20th century world and American history," said Shanbaum. "With these fascinating materials that go back to the Council's founding in 1914, I believe we have carved out a niche focusing on history-related education materials, which is different from what most foreign policy organizations offer."

Included on the worksheet page are primary source excerpts on Andrew Carnegie and also the peace movement in the United States during and after World War I. Other passages, which have been curated and modified for the classroom, focus on the American Civil Rights Movement, the Chinese Cultural Revolution, and Soviet Russia.

The newest worksheets on contemporary events match the curricula of U.S. and Comparative Government courses. They focus on issues such as populism, freedom of speech, and immigration and state sovereignty.

Most excerpts come with discussion questions that stimulate analytical thinking and promote group discussion. For example:

"What if, today, the last great empire on earth was nothing more than a fiction trying its best to convince both itself and others of its reality?" Do you agree with this statement about the Soviet Union in 1981? Use evidence to support your claim. (From Was Soviet Policy Dictated by the Empire's Strength of Weakness? Worksheet based on 1981 article)

In addition, be sure to check out Carnegie Council's curated education collections of podcasts on iTunesU. Topics include Islam and the West, Nuclear Proliferation, and Globalization.