Presentation Topic: Food is EVERYTHING 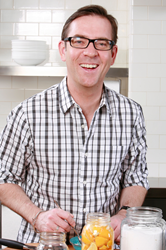 Ted Allen’s topic, Food is EVERYTHING, will address his career, the importance of cuisine and the value of food when promoting a destination.

Ted Allen, the Emmy and two-time James Beard Award winner who is best known as the host of the hit prime-time competition series “Chopped” and “Chopped Junior” on the Food Network, will present a keynote address on the second day of the 2017 Global Tourism Summit in Honolulu.

Allen will make his presentation on Wednesday, September 20 at noon at the Hawaii Convention Center. Allen’s topic, Food is EVERYTHING, will address his career, the importance of cuisine and the value of food when promoting a destination.

George D. Szigeti, HTA president and CEO, noted that Allen’s presentation will convey the importance of locally inspired cuisine and how this relates to the Hawaii experience. “Ted Allen and the Food Network have had an enormous impact in showing how cuisine is an enticing aspect of the travel experience for any destination. His presentation at the Global Tourism Summit will be fascinating for anyone who loves enjoying food when they travel.”

Szigeti added, “Hawaii’s standing as a world-class culinary destination continues to strengthen and evolve, and a key reason for that is the outstanding, creative chefs we have throughout the islands. They utilize the delicious, locally grown foods produced by farmers and ranchers statewide to prepare new dishes of cuisine that highlight our heritage, culture and ethnic diversity.”

Allen was previously the host of Food Network’s “Food Detectives,” a frequent contributor to “The Best Thing I Ever Ate,” and a series regular judge on four seasons of both Food Network’s “Iron Chef America” and Bravo Network’s “Top Chef.” He started in television as the food and wine specialist on the groundbreaking Bravo series “Queer Eye.”

Allen is the author of two cookbooks, “In My Kitchen: 100 Recipes and Discoveries for Passionate Cooks,” and “The Food You Want to Eat: 100 Smart, Simple Recipes.” He also co-wrote the New York Times best-seller “Queer Eye for the Straight Guy: The Fab Five’s Guide to Looking Better, Cooking Better, Dressing Better, Behaving Better, and Living Better.”

Since 1997, Allen has been a contributor to Esquire magazine, and was a finalist for a National Magazine Award for his Esquire feature on the little-known phenomenon of male breast cancer. He also writes for such publications as Bon Appétit and Food Network Magazine. Before joining Esquire, Allen was a senior editor and restaurant writer at Chicago magazine.

In 2012, Allen won a James Beard Award for his work hosting “Chopped,” and another for the show overall. He earned a 2004 Emmy with the cast of “Queer Eye,” which was nominated again the following year. In 2016, Chopped was nominated for a Critic’s Choice Award.

Attendees can participate in the Global Tourism Summit and hear Allen’s keynote presentation by registering online at http://www.GlobalTourismSummitHawaii.com.

Several options are available for registration:

The Global Tourism Summit will share the significance of the Hawaiian culture, eco-tourism, global marketing, technology and innovation in presentations and panel discussions, with the overall intention of bringing people together to help improve tourism in Hawaii and abroad.

Previously known as the Hawaii Tourism Conference, HTA changed the name of the annual event to the Global Tourism Summit to more accurately reflect Hawaii’s emergence as a leader in international travel and tourism.

About the Hawaii Tourism Authority
The Hawaii Tourism Authority is responsible for strategically managing the State of Hawaii’s marketing initiatives to support tourism. HTA’s goal is to optimize tourism’s benefits for Hawaii, while being attentive to the interests of travelers, the community and visitor industry. Established in 1998 to support Hawaii’s leading industry and largest employer, HTA continually strives to help ensure the sustainability of tourism’s success.