Lack of diversity in upward mobility remains an ongoing challenge 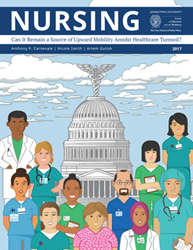 Nurses have been in the vanguard in expanding women’s economic opportunity and power in the workplace.

Policy discussions about the best way forward with healthcare reform has left out a major group of professionals central to making the system work: nurses. Nursing: Can It Remain a Source of Upward Mobility Amidst Healthcare Turmoil?, a new report by the Georgetown University Center on Education and the Workforce (Georgetown Center), shows that a college education is increasingly key to success in a nursing career, with 66 percent of registered nurses having a bachelor’s degree or higher today compared with 32 percent in 1980. The report also reveals a challenge with diversity for the profession: 71 Percent of RNs are White compared to only 7 percent who are Latino and 12 percent who are Black.

Low-income nurses and those from racial and ethnic minority groups face educational barriers to upward mobility, as pressure to upskill has made the bachelor’s degree the preferred entry-level credential for the higher-skill, better-paying RN positions (especially in hospitals). The RN profession pays competitive wages, averaging $67,000 a year, $7,000 more than average wages for all workers. By comparison, licensed professional/licensed vocational nurses (LPNs/LVNs), who are 9 percent Latino and 27 percent Black, earn on average less than $46,000 per year.

“Nurses have been in the vanguard in expanding women’s economic opportunity and power in the workplace,” said Anthony P. Carnevale, director of the Georgetown Center and lead author of the report.

“Pressure to reduce costs is gradually transferring some doctors’ patient care and prescription privileges to nurse practitioners and other advance practice registered nurse in a clinical setting,” said Nicole Smith, chief economist of the Georgetown Center and co-author of the report.

Modern nursing involves more than just caring for patients. Nurses spend more than half of their time on administrative activities, including documentation and care coordination. Registered nurses (RNs) have the opportunity to specialize through graduate education and become advanced practice registered nurses (APRNs). APRNs have more autonomy and are often involved in diagnosis and treatment of medical conditions. APRNs also have higher earnings, with certified nurse anesthetists earning the most among nursing specialties, $153,000 a year.

The report also analyzes the impact of healthcare reform and shows that replacing Obamacare could put more than 156,000 nursing jobs at risk in the first year of implementation alone. Sixty percent of the lost nursing jobs would impact the Southern and Midwestern states already ravaged by job losses in manufacturing.

The report’s other major findings include:

The full report, Nursing: Can It Remain a Source of Upward Mobility Amidst Healthcare Turmoil?, is available online at cew.georgetown.edu/nursingcareers.