A Game Changing Diaper Bag Has Just Hit the Market

The Decka by Vecho Bags is an overachiever in the world of diaper bags, in that it has a diaper-changing surface, a bassinet with a padded, removable, liquid-resistant liner & two coolers to keep food and drinks fresh. 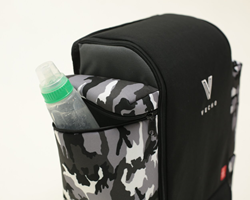 A Cooler Dedicated to Bottles. Did we mention the Decka is engineered to stand on its own?

Vecho means, "The Echo of Victory"

For years now many parents have voiced their frustration with the lack of public diaper changing stations. Even famous celebrity Ashton Kutcher, and former host of the hit MTV reality show Punk'd took to social media in 2015 to bemoan the obvious lack of changing tables. He wrote: “There are NEVER diaper changing stations in mens public restrooms. The first public men’s room that I go into that has one gets a free shout out on my FB page! ‪#‎BeTheChange‬.”

In October 7 of 2016 former president Obama signed a bill called the BABIES act that required changing stations be “physically safe, sanitary and appropriate” and available in men and women's restrooms in all Federal buildings. Yet despite all of these measures some independent tests have found that on public diaper changing tables dangerous bacteria such as: E Coli and Shigella are present. Those same tests have also found fecal matter raising even more concerns.

Vecho Bags has just hit the market with their brand new solution and it's called the Decka. The Decka is a diaper bag that does it all. It has a personal changing station complete with upward opening pockets that store fresh diapers, a rip-away, drop-down pouch specifically designed to hold baby wipes and a removable, liquid-resistant, cushioned liner for the bassinet. In addition to these features Vecho Bags has added not one but two integrated coolers to keep food and drinks fresh. They managed to squeeze all of these features into a diaper bag that looks nothing like a traditional diaper bag, yet is just about two inches taller than your average backpack. It's secret is its fold-out design that allows the bag to practically double its length allowing parents multiple conveniences in one backpack. In addition to all of these new features Vecho Bags has taken extra steps to ensure parents have less to worry about by designing the Decka so that it stands up on its own thereby preventing baby bottles from leaking. All of these new, exciting and unique features will no doubt be an attractive asset for parents as they plan their family outings with their little one(s).

A Snapshot of Some the Decka's FeaturesIn addition to all of these features listed the Decka has a convenient cellphone and keys pocket located on the back of the backpack.

A cooler dedicated to Bottles. Did we mention the Decka is engineered to stand on its own?A lot of thought went into the design of the Decka. A dedicated, insulated bottle cooler for baby bottles and drink cans, bottles is unheard of in diaper bags. Vecho Bags is the only company that offers this game changing beautiful design. The bag is desi