This year's Coast 2 Coast Music Conference looks to give competing artists a shot at advancing their career with recording contracts, touring packages, and cash prizes 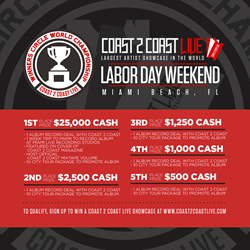 The Coast 2 Coast LIVE Music Conference 2017 is only days away and this year is on track to one of their most successful conferences yet. The biggest change Coast 2 Coast has made to their annual networking event is the World Championship competition and awards. Over the past year, all the artists who have competed and won 1st place in Coast 2 Coast LIVE's artist showcases throughout the U.S. and Europe will come together in Miami Beach to compete for the top spot. Over the weekend, artists will compete in several showcases to narrow down the Top 20 artists and from there The Top 5 and overall winner will be selected by a panel of industry judges. All the artists who place in the Top 5 will receive a cash prize as well as a recording deal and 10 city tour package to promote their album. Below is a detailed list of the prizes for the Top 5 artists.

This will be the first year Coast 2 Coast LIVE has implemented these prizes and they hope it will catapult these artists into the mainstream and take their careers to the next level. The schedule for this weekend's event is currently posted at the official Coast 2 Coast Music Conference site. Coast 2 Coast LIVE expects to see major success with these changes and plan to make next year's music conference even bigger! Those who still wish to attend this year's Coast 2 Coast Music Conference can still register and purchase their weekend and VIP passes at the official website.

About Coast 2 Coast LIVE: Coast 2 Coast LIVE is the largest artist showcase in the world and tours the country looking for the next stars in all musical genres using our patented interactive platform. Coast 2 Coast LIVE puts the artist in front of celebrity judges to showcase their talents, while the judges give scores and feedback live via our interactive judging system on iPads, allowing artists to instantly get feedback on their performance and music from experts in their craft. Our events are open to all artists, just submit your music at coast2coastlive.com for the next event in your area, get votes from your fans, and if selected you can perform at our event, sell tickets, and win the grand prize package!

About Coast 2 Coast Music Conference: The Coast 2 Coast Music Conference is an annual networking event bringing together top industry DJs, producers, A&Rs, program directors and more to speak on formal panels and give practical advice to developing independent artists. The conference also features workshops, showcase events, DJ Battles, Model Contest, Afterparties and the grand finale VIP Yacht Cruise through beautiful Miami and the Biscayne Bay! All of this leads up to our World Championships showcase, where the top performer of the year will be crowned and awarded a cash prize of $25,000 as well as an exclusive record deal with Coast 2 Coast. This is one event you don't want to miss so be sure to sign up for the next Coast 2 Coast LIVE event in your nearest city!