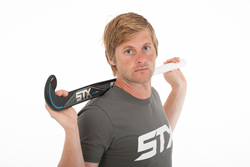 The company’s vision for performance and product in the two sports I love most are spot on with my mindset as an athlete.

Under the unique agreement, Jackson will represent the STX brand in both field and ice hockey. As one of the world’s most recognized international field hockey players, Jackson has amassed 251 international caps and 164 goals since his debut with the English national program in 2006, at the age of 19.

“We are thrilled that Ashley has chosen to pursue the next phase of his career with STX,” said Ed Saunders, Director of Marketing for STX. “We look forward to incorporating his world-class player insight into the development of our next generation of hockey products, while working closely with him to achieve his athletic goals in the years to come.”

Jackson’s agreement with STX will also encompass ice hockey. It was recently announced that Ashley will compete for the Basingstoke Bison of the English Premier Ice Hockey League, enabling him to pursue a lifelong passion for the sport.

“I could not be happier to have signed with STX,” said Jackson. “The company’s vision for performance and product in the two sports I love most are spot on with my mindset as an athlete. I am excited to share in the development of the brand and its products in the UK and beyond for the foreseeable future.”

In addition to product use and development, STX will partner with Jackson in his coaching education and player development system, Jackson 7, in both the UK and US.

About STX:
STX is a global sporting goods leader in the sports of lacrosse, field hockey and ice hockey. With its 1970 introduction of the first synthetic lacrosse head, STX ushered in the “modern era” of what is now the fastest growing team sport. Based in Baltimore, the home of lacrosse, STX has been universally recognized for innovation in product design and development. STX continues to strive for new performance standards in sporting goods equipment at the highest levels of competition. For more information, visit http://www.stx.com.