The Partner State Key Laboratory of Chirosciences at the Department of Applied Biology and Chemical Technology (ABCT) of The Hong Kong Polytechnic University (PolyU) discovered a newly emerged superbug, hyper-resistant and hypervirulent Klebsiella pneumoniae, which may cause untreatable and fatal infections in relatively healthy individuals and will pose enormous threat to human health. 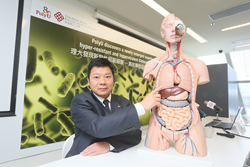 Prof. Chen Sheng, Professor of ABCT, collaborating with Prof. Rong Zhang from the Second Affiliated Hospital of Zhejiang University, conducted an investigation into a fatal outbreak of pneumonia in the Second Affiliated Hospital of Zhejiang University in China in February 2016. The study involved five patients who underwent surgical operation for multiple-trauma. All of them were later infected in the intensive care unit (ICU) and developed severe pneumonia, and eventually died of septicaemia and multiple organ failure. The causative agent of these five patients was found to be a carbapenem-resistant K. pneumoniae (CRKP) strain, a type of previously-defined superbug. Furthermore, these CRKP strains are also hypervirulent and belong to ST11 type of CRKP, the most prevalent and transmissible CRKP strains in Asia. As these strains simultaneously exhibit the features of hyper-resistance, hypervirulence and high transmissibility, they can be considered a real superbug known as ST11 CR-HvKP (ST11 carbapenem-resistant hypervirulent K. pneumoniae).

ST11 K. pneumoniae strains proliferate in the gastrointestinal tract (GI tract) of human and animals and may cause opportunistic infections such as pneumonia in clinical settings. These strains, after acquiring plasmid encoding a carbapenemase gene, become resistant to the carbapenem antibiotics and caused untreatable or hard-to-be treated infections, therefore defined as superbug. These superbug strains could further evolve to become ST11 CR-HvKP through acquisition of the hypervirulence plasmids. The ST11 CR-HvKP strains do not only infect lungs and cause pneumonia, but also invade the bloodstream and other internal organs. Due to its hypervirulence and phenotypic resistance to commonly used antibiotics, ST11 CR-HvKP strains may cause untreatable and fatal infections in relatively healthy individuals with normal immunity.

ST11 CR-HvKP strains possess a mucoid outer layer, which enables them to stick to various materials, such as the surface of medical devices and tubing as well as other surfaces in the ICU. The transmission route is not clear yet, but our data suggest that medical equipment such as ventilator and different catheters might be transmitting these new superbug strains. Human-to-human transmission may also be possible, mainly in hospital settings. Improved infection prevention and control policy in hospital seems to be effective to control further transmission of this superbug in the ICU. Novel strategies must be devised to prevent ST11 CR-HvKP from proliferating extensively in the human intestinal tract where they were detected. ST11 CR-HvKP can easily be detectable by the Polymerase chain reaction (PCR) method, targeting specific resistance and virulence genes. The study showed that the use of colistin (the last resort drug for carbapenem-resistant enterobacteriaceae infections) alone or in combination with other drugs were not very effective in treating infections caused by ST11 CR-HvKP. Ceftazidime/avibactam may be the effective antibiotic, but ST11 CR-HvKP may develop resistance to this antibiotic very quickly based on the clinical data from the USA.

Prevalence of ST11 CR-HvKP strains in Hong Kong is currently unknown. Two studies conducted in Hong Kong have shown that mortality rate due to K. pneumoniae-mediated bloodstream infections was high, reaching 20% and 32% respectively. We plan to collaborate with clinicians in local hospitals to investigate the proportion of clinical K. pneumoniae isolates that belong to HvKP or CR-HvKP, and characterize their genetic features.

This study is recently published in the prestigious academic journal The Lancet Infectious Diseases. The full article can be accessed via the link: http://www.thelancet.com/journals/laninf/article/PIIS1473-3099(17)30489-9/fulltext.