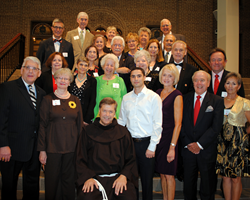 "It is our mission as Cradling Christianity to help preserve and foster the lives of Christians in the Holy Land..."

“Cradling Christianity,” the Columbus, Ohio region of the Franciscan Foundation for the Holy Land, will host its annual benefit dinner to support the Franciscans of the Holy Land in their efforts to preserve the Christian remnant there on September 7th.

The Franciscan Foundation for the Holy Land (FFHL) was founded in 1994 to help preserve the Christian presence in the Holy Land, a presence that has been dwindling for decades. Severe political and economic hardships force an estimated 350 Christian families to leave the Holy Land each year, and only about 150,000 Christians remain there today.

This year, Cradling Christianity will hold its annual fundraising dinner on Thursday, September, 7th at St. Agatha Parish in Upper Arlington, Ohio, in Msgr. Kennedy Hall. A Catholic Mass will be celebrated by FFHL president, Fr. Peter Vasko, ofm, at 5:30 p.m. Registration and a cocktail hour will begin at 6:30, followed by dinner at 7:30. The evening will also include an update from FFHL President Fr. Vasko, OFM, regarding the work of the FFHL, and a presentation by keynote speaker Fr. David Meconi, SJ, Associate Professor of Theological Studies and Director of the Catholic Studies Center at St. Louis University.

Reservations can be made by contacting Chuck Bramlage, chair of this year’s dinner, at chuckbramlage(at)gmail(dot)com.