Plant Based Foods Sales Experience 8.1 Percent Growth Over Past Year 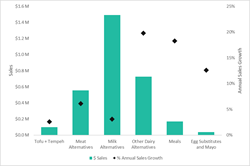 “It’s exciting to see the steady growth of the plant-based foods industry."

Today, the Plant Based Foods Association and The Good Food Institute released new data commissioned from Nielsen, the leading retail sales research company, which shows the total market for the plant-based food sector (as defined below) in Nielsen’s Expanded All Outlets Combined Channel tops $3.1 billion in sales.

According to the data, the growth overall in plant-based foods was 8.1 percent since last year, as compared to a decline of 0.2 percent all foods sold in the same channel. (All food departments include deli, grocery, dairy, meat, produce, bakery, frozen foods.)

This custom data set was compiled from specific lists of plant-based foods for each category that represents a replacement for animal products.

The data showed that plant-based dairy alternatives are a fast-growing category, with 20 percent growth, topping $700 million in sales over the past year. This category, which excludes milks, includes plant-based cheeses, yogurts, and ice creams. Yogurt shows significant growth, at 56 percent since last year, according to the data.

The plant-based milk category is up 3.1 percent since last year. Over the same period, according to the Nielsen data, cow’s milk sales are down about 5 percent.

These findings come as a bill has been introduced in Congress that would prohibit plant-based food makers from using words such as “milk,” “cheese,” or “yogurt,” even with appropriate modifiers such as “soy”, “almond” and “dairy-free”.

The results also showed plant-based meats growing at 6 percent compared to a year ago. Refrigerated meats are growing more than frozen, according to the data, at 23 percent since last year.

“It’s exciting to see the steady growth of the plant-based foods industry,” said Michele Simon, executive director of the Plant Based Foods Association. “With this new baseline data, we have a solid foundation for this young industry to grow each year,” she added.

“There is a revolution going on in the plant-based meat space,” said Bruce Friedrich, executive director of The Good Food Institute. “Right now, the sector is small, but growing, and we are working hard to create a viable market sector. It is especially impressive to see that all the plant-based companies are working cooperatively, because a rising tide will lift all boats.”

The Plant Based Foods Association is a trade association representing 80 of the nation’s leading plant-based food companies.

The Good Food Institute is a 501(c)(3) nonprofit that uses markets and food technology to transition the global food system away from industrial animal agriculture.

Methodology:
The data represents plant-based foods that directly replace animal products, including meat, seafood, eggs, and dairy, as well as meals that contain direct replacements for these animal products. Within each category, both branded products and private labeled items were included. The market was segmented into the following categories:

*Butter alternatives were defined as vegan products marketed using the terms “butter,” “buttery spread,” or “vegan spread.” Margarines that are not specifically marketed to function as butter replacements were not included.