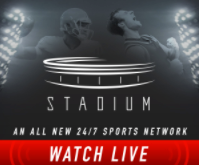 Stadium, the first-of-its-kind, 24/7, multiplatform sports network, is now available on broadcast television in markets across the country. Leveraging Sinclair Broadcast Group’s vast broadcast spectrum and household reach, Stadium will initially be available in 57 U.S. markets via digital subchannels. Stadium premieres in over 40% of the country and is expected to expand aggressively in the coming months both within and outside of Sinclair markets.

"We are thrilled with Stadium’s television footprint at launch and are excited with the opportunity to reach a previously underserved audience,” said Jason Coyle, CEO of Stadium. “With more than 30 million digital antennas in market across the country and millions who view broadcast television on cable looking for a modern day alternative to the traditional sports network, we are excited to bring a fully programmed, linear network of premium sports content to these viewers as part of their channel options."

This Saturday, fans are encouraged to tune in for a full afternoon and evening of college football. The action kicks off at 3:30 p.m. ET in Norfolk as the University of North Carolina visits Old Dominion and continues at 7:00 p.m. ET with a LA Tech at WKU matchup.

Stadium studio programming will cover national storylines across all major sports and is built upon a commitment to on-the-ground reporting and localized expertise enabled by a network of on-camera contributors from 100+ markets across the country.

“Sinclair’s investment in Stadium builds on our longstanding commitment to connecting our communities with sports programming—from local high school teams, to college to national leagues—as well as our recent focus on expanding our business with new networks that leverage our broadcast spectrum and household reach,” said Scott Shapiro, Vice President, Corporate Development of Sinclair Broadcast Group.

Designed with a platform agnostic approach, Stadium will also stream the 24/7 linear network feed on WatchStadium.com, the Stadium iOS and tvOS apps, Twitter (@WatchStadium), the Twitter app on connected devices and Pluto TV, on Channel 207. Additional complementary streaming apps and distribution partners will be released in the coming weeks.

The full list of launch markets and accompanying channels included in the first wave of rollouts can be found in the attached document.