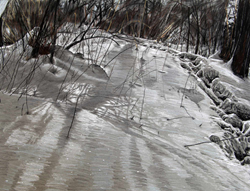 In addition, Linda has submitted entries in to The American Artists Professional League's 89th Grand National Exhibition, the Catharine Lorillard Wolfe Art Club's 121st Annual Open Juried Exhibition, the International Association of Pastel Societies' 31st Juried Online Exhibition, and the Degas Pastel Society's 20th Membership Exhibition, for which "Sunset, Gulf of Mexico #2" has been accepted. In the past a number of Linda's paintings have won awards at these exhibitions, including "Footsteps #12" winning the Claude Parson Memorial Award at The American Artists Professional League's annual exhibition and "Footsteps #5" winning the Connecticut Pastel Society Award for a Pastel at the Catharine Lorillard Wolfe Art Club's annual exhibition

Linda continues to work on a new piece outside of the “Footsteps” series, expected to be finished by the end of the year.