The Right Light at the Right Time 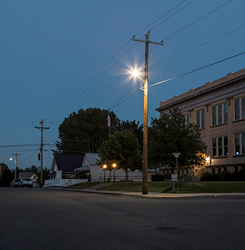 When you pick up an Evluma light, you feel the quality in it

"We are always looking at ways to serve our customers efficiently and to use the best products that we can,” stated Amy Sawyer, Project Coordinator, Engineering & Operations at Pend Oreille County PUD, when asked about her recent experience converting the county’s legacy street and area lighting to LED. While she describes Pend Oreille as a ‘small utility,’ serving the entire county means they serve four small towns plus the city of Newport, WA. “Most people live outside of the city. So if we have to travel an hour to fix a light, that’s real money and time,” she said.

Pend Oreille initially considered converting HPS to LED a few years ago. They even had a few test units installed. When BPA (Bonneville Power Authority) announced the availability of funding to help with the conversion process, interest was truly piqued. “HPS is very maintenance-heavy. HPS also uses somewhere between 4 to 5 kWh with a demand of 0.25. LED used between 1 to 2 kWh with 0 demand.” Engineering and Operations Director Chris Jones saw the Evluma AreaMax at the 2015 NWPPA E&O Expo renewing interest in a program. “Per the guidelines set forth for public utilities we went out to a sealed bid process. We thoroughly investigated all the brands submitted. Evluma came out on top,” stated Sawyer.

“The quality of the product stood out immediately. When you pick up an Evluma light, you feel the quality in it.” In fact, several key features drew the attention of Amy and her team. “The linemen love that the fixture is sealed. No bees can get into it. It seems like a silly problem, but when you’re approaching a light and there is a beehive inside of it, and you can’t see it until you’re touching it? It’s a big deal.” Equally as important was the Photocontrol Failsafe™ feature built-in to every AreaMax. “That’s a huge maintenance saver for us. Photocells on HPS don’t last very long. For us photocontrols were sometimes lasting as little as three and six years. We were hoping for them to last ten plus years.” With Failsafe Pend Oreille could transfer and reuse all their old photocontrols further reducing cost.

Pend Oreille replaced their 100, 150, 200 and 400W HPS fixtures, a total of 1600 lights. They replaced the 100-200W HPS with the 70W AreaMax in 4000K CCT. They chose a 90W LED light from another manufacturer to replace the 400W HPS. It didn’t have the same features as the AreaMax, but Pend Oreille felt that the light quality was about equal. “Well, now that we’re towards the end of our changeout, close to a half of our 400W customers have asked for the 70W light. They liked the AreaMax a lot, and it was bright enough for their purposes.”

The ConnectLED app was also important to Pend Oreille. “Not just for ease of use, but there’s a safety component too,” added Sawyer. “Any time we’re not having to have a guy put hooks on his boots and climb a pole, we’re ahead on safety. It’s one less opportunity for an injury and for hardship on the body. Our line crew, management and safety department love that feature.” ConnectLED connects with the AreaMax luminaire via BLE giving utilities the ability to disconnect/connect a light from service, set overall brightness and create a dimming schedule without having to touch the pole. Pend Oreille ordered a license and tablet for both the north and south locations. “There is 55 miles between the two lineman headquarters. Keeping one at each location is prudent.”

Pend Oreille started the change out February 2017 and completed in June the same year. “We hit it hard for a reason. In addition to the BPA incentive money, right before we were ready to start this program another grant opportunity appeared. We qualified for the Relight Washington Grant from the Transportation Improvement Board of Washington.” This grant, designed to help small cities lower their monthly bills, covers the LED replacement of any light paid for by the city. The AreaMax was the right light at the right time.

“The high level of customer service made the change out even smoother.” At the last minute Pend Oreille requested a change to the factory-installed leads from 66in to 8ft. “The very next shipment had the longer leads. We are happy with the quality of the product, the price, and the customer service. There is a measure of comfort to all of us that we are installing a device that we are not going to have to come back and deal with for a while. I could see how we could go to this as the only light that we offer.”