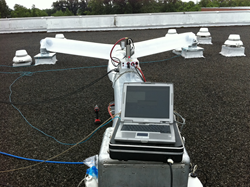 Attendees of an Aeroseal LLC-sponsored webinar entitled Changing Code and the Importance of Duct Sealing learned today of an imminent change to green building standards that tightens regulatory guidelines for duct testing. The latest version of ASHRAE 189.1, the Standard for the Design of High-Performance Green Buildings, will expand duct testing requirements to include low pressure ducts as well as high pressure ducts. Proponents of this change say the update is intended to reflect the significant impact that duct leakage – even in low pressure ductwork – can have on energy use and overall building performance.

According to Jeff Boldt, a voting member of the ASHRAE 189.1 committee and director of innovation and quality at IMEG Corp., the latest updates to ASHRAE 189.1 are finalized and have been incorporated into the standard where they are undergoing a final accuracy review before publication. A key update to that standard is the broadening of duct leakage testing to include ducts operating at 3-inch WG (water gauge), which is more inclusive than the current requirement of leakage testing for ducts operation at ≥4-inch WG.

“I spearheaded this update because of concerns that it is very rare to have ducts greater than 4-inch pressure class to be used today, while it was very common when the original requirement was to test the leakage of ducts greater than 3-inch WG pressure class. This resulted in much less leak testing today, while standard 189.1 is attempting to reduce energy use,” said Boldt.

Attendees of the webinar reviewed evidence from several studies that indicate that, on average, lower-pressure 3-inch WG ducts leak as much as eight times more than 4-inch pressure class ducts. The implication is that this is because they have not been subject to leak testing. By broadening the requirements to include lower-pressure ducts, the ASHRAE committee hopes the new standard will have a positive impact on reducing average energy consumption of U.S. buildings.

“The industry has resisted testing because of the additional cost involved,” said Bob Reid, former chairman of ASHRAE Technical Committee 5.2 and chief engineer at SPOT (Spiral Pipe of Texas). “But in reality, building owners can either make a relatively small payment upfront to ensure their ducts are operating properly, or they can continue to pay higher operating costs throughout the life of the building. The 189.1 updates to duct testing will help ensure that today’s buildings are operating as efficiently and cost-effectively as possible.”

In a 2015 survey conducted by the Building Commissioning Association, 75 percent of engineers surveyed reported that leaky ducts are the source of substantial energy loss in U.S. buildings today. Sixty-eight percent agreed that leakage rates of 15 percent or more are common.

Along with information regarding updates to ASHRAE 189.1, webinar attendees learned about the innovations in duct sealing that will help contractors easily meet tightening standards. Neal Walsh, senior vice president of Aeroseal LLC, shared information about an aerosol-based duct sealing technology that seals leaks from inside the ductwork.

“By sealing from the inside, the sealant can quickly access and seal leaks throughout even the most inaccessible duct systems,” said Walsh. “Low pressure or high pressure ducts – it doesn’t matter. Best of all, the computerized process allows the contractor to monitor results as the sealing procedure is taking place, so they know exactly how tight the ducts are even before they’re finished.”

A 2001 Oak Ridge National Laboratory study found that, compared with manual sealing methods, the aerosol-spray technology is 50% more effective at sealing duct leaks and can potentially reduce labor time and costs for duct sealing by 70%. Aeroseal duct sealing has been used to seal leaks and increase the building performance of hundreds of buildings around the world, including hospitals, hotels, office buildings, multi-family apartment buildings, and other structures.

For more information about the latest changes to ASHRAE 189.1 or aeroseal duct sealing technology, visit http://www.aeroseal.com or call (937) 428-9300.