Unanimous A.I. founder, Dr. Louis Rosenberg, opens TEDxKC with a question for the sold-out crowd: Is there hope for humans in an AI world? 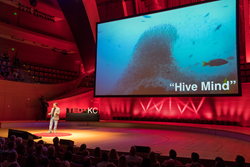 Rosenberg asked the perspective-alerting question: Why can’t we create new interfaces and algorithms to connect people into artificial swarms, modeled after swarms in nature?

I’m not talking crowdsourcing like we humans do with polls and surveys. I’m talking about forming systems: real-time systems, with feedback loops so deeply interconnected that a new intelligence forms, an emergent intelligence with its own personality & intellect. I’m talking forming a ‘hive mind.'

“An alien intelligence is heading towards us at breakneck speeds —and it will be smarter than us. So what do we do?” Louis Rosenberg, Ph.D., founder and CEO of Unanimous A.I., posed this perspective-altering question to the sold-out crowd of more than 4,000 attendees gathered for TEDxKC on Friday, August 18, at the Kauffman Center for Performing Arts in Kansas City, MO. The ninth annual event – sponsored by VML and the Ewing Marion Kauffman Foundation – is the largest independently organized TEDx event in North America.

Reflecting this year’s TEDxKC theme — “Perspective: Where You Stand Matters” — Rosenberg challenged attendees to consider the real and urgent dangers of artificial intelligence (AI) while offering a solution: a new form of AI modeled after swarms in nature. Using this approach to AI offers humans an opportunity to amplify human intelligence, not replace it. It may hold the key to keeping humanity human.

Our next evolutionary pressure point
Rosenberg explained this alien intelligence isn’t rocketing through space. Rather, it will be born right here on earth, a sentient AI that will emerge from a research lab where billions of dollars are being invested to create artificial brains made of billions of artificial neurons. “An alien will arrive and it will be smarter than us. And when that happens, it will be our next big evolutionary pressure point — one that will require us to get smarter, much smarter, or lose our position as the top intelligence in our environment.”

So what do we do?
Rosenberg has been personally concerned about this sentient AI ever since he took his first course in artificial neural networks as a Stanford University graduate student more than two decades ago. He didn’t think there was a solution until he asked this question: “How have other species handled evolutionary pressures where they needed to get smarter…fast?”

It turns out, the answer goes all the way back to the birds and the bees. And fish. And ants.
All of these creatures have evolved methods of amplifying their intelligence by “thinking together” in systems. This is why birds flock, and fish school, and bees swarm — they’re smarter together than alone. The hive mind is nature’s way of aggregating diverse perspectives in a population to find the best solution for the group.

But what about humans?
Rosenberg acknowledged that humans haven’t done a very good job of combining diverse views. “We aggregate perspectives by taking votes, polls, and surveys. The fact is polls are polarizing. They drive humans to entrench, exposing and reinforcing our differences, but not helping us find common ground.”

How can we amplify our intelligence now?
With more than 25 years of research and development in human-computer interaction, Rosenberg asked the perspective-alerting question: Why can’t we create new interfaces and algorithms to connect people into artificial swarms, modeled after swarms in nature?

Rosenberg — a prolific inventor, scientist, entrepreneur and AI expert who was recently featured on National Geographic’s YEAR MILLION series — recently developed a new form of AI aimed at amplifying human intelligence, not replacing it. Known as Swarm AI, the new technology combines real-time human insights and AI algorithms to produce “hive minds” modeled after natural swarms for humans to converge on optimized insights, predictions and decisions. Swarm AI taps not only our collective human knowledge but also our values, morals, and sensibilities to create a super-intelligence that is inherently aligned with our interests.

In 2015, Rosenberg launched Unanimous A.I., a Silicon Valley company that has pioneered Swarm AI technology to enable people to form real-time swarms online. The system, known as UNU, has made headlines recently for correctly predicting the Kentucky Derby® Superfecta, the Oscars®, the Super Bowl®, and even the rise of Donald Trump.

“It turns out human swarms are smart. In fact, they’re smarter than we ever expected. By swarming, groups average about 130% amplification in intelligence over the individuals who comprise it,” he said. “By thinking together using Swarm AI, we might be able to finally solve the hardest problems we face – poverty, inequality, sustainability.”

About Unanimous AI
Unanimous A.I. is a Silicon Valley company that has pioneered a new form of AI aimed at amplifying human intelligence, rather than replacing it. Unanimous A.I.’s proprietary Swarm AITM technology combines real-time human insights and AI algorithms to produce “hive minds” modeled after natural swarms. Unanimous has generated an impressive track record. The company’s technology has outperformed traditional AI systems and human experts in many high profile challenges, and was recognized among Tech Republic's 6 most exciting AI advances of 2016 and among the Top 10 Tech Trends Transforming Humanity by Peter Diamandis. For more visit http://unanimous.ai

About Louis Rosenberg, Ph.D.
Louis Rosenberg, Ph.D., was recently named AI Person of the Year by the Global AI Achievement Awards for developing Swarm AI technology, hailed by the award committee as “...the single best hope we have for keeping humans relevant in an AI dominated future.” As the founder of Unanimous A.I., Rosenberg was featured as an AI expert in the recent National Geographic series, YEAR MILLION. The BBC also featured Rosenberg in a special presentation: Why Bees Could be the Secret to Superhuman Intelligence. Rosenberg earned his Ph.D. from Stanford University, where his doctoral work resulted in one of the first immersive Augmented Reality systems ever built (Virtual Fixtures platform for the U.S. Air Force). Rosenberg is well known as a prolific inventor, having been awarded over 350 patents worldwide for his work in human-computer interaction. He was previously founder and CEO of Immersion Corporation, a pioneering Virtual Reality established in 1993. Rosenberg has also been a tenured professor at California Polytechnic State University (Cal Poly).

Swarm Insight, Swarm and Swarm A.I. are trademarks of Unanimous A.I. and may be registered in the United States and/or other countries. Any other trademarks or registered trademarks mentioned in this release are the intellectual property of their respective owners.

Unanimous AI is a Silicon Valley company that has pioneered a new form of AI aimed at amplifying human intelligence, rather than replacing it.

"By thinking together using Swarm AI, we might be able to finally solve the hardest problems we face – poverty, inequality, sustainability," Louis Rosenberg, PhD