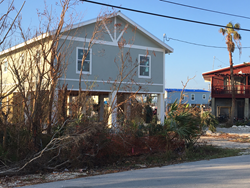 There's a Better Way to Build, its the Innova Way©

On September 10, 2017, Hurricane Irma’s center eye made landfall in the lower Florida Keys on Cudjoe key. The catastrophic damage caused by the storm extends out from the center eye more than 30 miles in every direction and continued as Irma made its way up the Gulf Coast of Florida and beyond. JP Morgan predicts that Irma losses will rank among the worst and most costly in history.

Less than 5 miles east of Cudjoe key at ground zero, stands a new home on Mariposa Road and if not for the destruction all around as far as the eye can see, you would not know that this home just weathered one of the most powerful storms to hit the Florida Keys in over 70 years. Unfortunately, the surrounding neighbors did not do so well as more than 90% of the homes in this area have extensive damages and many are a complete loss.

You are probably thinking this is one of those expensive concrete bunker houses, but no, this house is an energy efficient structural insulated panel house manufactured in Miami by Innova Eco Building System.

The Mariposa home is built with InnovaPanels© which are patented Dade County Coastal Impact Zone approved magnesium cement structural insulated panels. The panels are strong and highly energy efficient with an R-50 roof and R-38 wall system insulation ratings which reduces energy consumption by 50% or more for most home designs. The patented panels have been tested for wind loads exceeding 200 mph and are load bearing up to 4 floors. They can be used for any style of home or commercial building. Innova can work with the client’s design and precut the SIP panels into an easy to install building kit.

Incredibly, Irma is not Mother Nature’s first disaster resistance test as on September 25, 2015, an InnovaPanel© custom home was hit by an EF2 tornado on Johns Island in Charleston County, SC and sustained only minor cosmetic damages. Ten other surrounding homes were either severely damaged or a complete loss.

Jerry Gillman, CEO indicated that the performance of the Innova product in the eye of the storm speaks for itself. We have a saying at Innova, "There is a Better Way to Build, its the Innova Way©"