The Online Education campaign aims to convey the convenience and many possibilities of pursuing an online degree. 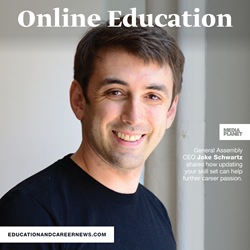 Mediaplanet has joined forces with the Coalition on Adult Basic Education (COABE) to educate readers on its Educate and Elevate Campaign which is working to raise awareness on the many faces and relevancy on adult education.

Mediaplanet, an independent publisher of content-marketing campaigns, today announces distribution of its tenth cross-platform edition of “Online Education.” The campaign aims to highlight online education in its various forms. Mediaplanet has joined forces with the Coalition on Adult Basic Education (COABE) to educate readers on its Educate and Elevate Campaign which is working to raise awareness on the many faces and relevancy on adult education.

Starting on September 27th, featured within USA TODAY and on Mediaplanet’s digital content hub, COABE shares how their campaign is working to urge policy makers on why the continuation of funding is necessary. In 2014, the Workforce Innovation and Opportunity Act called for adult education to be funded at a level of $649 million. Now, threats have been made to cut funding by $95 million on issues like adult education and literacy as well as cut by $9 billion from the Department of Education budget in 2018. Their campaign is a national endeavor aimed at highlighting how an investment in adult education represents a bold commitment to America's future

Direct impact of their initiative can be seen through examples such as Story Musgraves. Instead of finishing school, Mr. Musgraves ran off to Korea with the U.S. Marines where he was an aircraft electrician and an engine mechanic. He started flying with the Marines and over the next 55 years accumulated 18,000 hours in more than 160 aircraft. Using adult education as a catalyst for change, Mr. Musgrave obtained a GED® diploma and went on to become the only astronaut to have flown in all five space shuttles resulting in six space flights. He has earned seven graduate degrees and 20 honorary doctorate degrees.

Stories like Musgrave show the benefits of an adult education. Through Educate and Elevate, COABE hopes to show that advocacy for adult education is vital. To read more on this campaign, head to Mediaplanet’s digital content hub to see their call to action represented.

About Coalition on Adult Basic Education
The Coalition on Adult Basic Education represents the system of 55,000 adult educators nationwide and is organized to advance national and international adult education and literacy opportunities for all persons. The mission of the organization is to inspire educators so adults succeed and communities thrive.

About Mediaplanet
Mediaplanet is the leading independent publisher of content-marketing campaigns covering a variety of topics and industries. We turn consumer interest into action by providing readers with motivational editorial, pairing it with relevant advertisers, and distributing it within top newspapers and online platforms around the world.