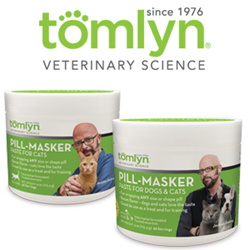 Tomlyn's Pill Masker paste for dogs and cats is an excellent product - I always recommend it.

Tomlyn®, maker of veterinary quality health and wellness supplements for pets, is proud to announce a partnership with cat expert and animal advocate, Jackson Galaxy to promote Tomlyn’s Pill Masker paste for cats and dogs.

“Jackson has been a fan of our Pill Masker product for years, so we’ve jointly created a Tomlyn Pill Masker package featuring Jackson and furry friends to promote this partnership,” says Tabitha Cromer, marketing manager at Tomlyn.

As part of this partnership, Jackson will be participating in Facebook Live events, where he’ll be answering questions about cats LIVE while providing tips to create a harmonious home for cats and their owners. Tomlyn will also be hosting a sweepstakes for one grand prize winner to receive a 30-minute Skype session with Jackson Galaxy to help solve their cat problems, along with a selection of Tomlyn cat health products.

“Tomlyn’s Pill Masker paste for cats and dogs is, very simply, an excellent product," said Jackson Galaxy. "I always recommend it because for the animals, the taste is irresistible, and for humans it makes the often-unpleasant job of giving pills to animals so much easier."

The overall pet supplement market is growing, with approximately $580 million annually, growing 3.5% over 2016, as consumers turn to supplements for their pets the same way there are doing for their own health*. According to the American Veterinary Medical Association, there are more than 79 million cats and dogs in the US alone. Close to 9 million of these pets (11%), according to their pet parents, struggle with taking medications, as reported in a survey conducted by Tomlyn and Harris Poll**.

For more information about Tomlyn, visit http://www.tomlyn.com. Learn additional benefits and uses for Tomlyn’s Pill Masker in this video from Jackson Galaxy.

Jackson Galaxy is an animal advocate, host of Animal Planet’s My Cat From Hell and is a New York Times best-selling author with more than 20 years of experience helping humans understand cats and helping cats find their mojo.

About Tomlyn®:
Tomlyn® an animal health and wellness company founded in 1976, carries a complete line of scientifically developed, veterinarian-approved animal health products. The company’s wide selection of product categories range from immune support, vitamins, digestive support and hairball remedies, to joint and hip support, calming aids and sanitizers. Tomlyn has expanded into the equine and bovine industry most recently with the EPIC® line and now the addition of three new Equistro® equine health supplements. Tomlyn is owned by the eighth-largest veterinary pharmaceutical company in the world.

*Source: https://www.researchandmarkets.com/research/kzzmcv/pet_supplements
**Source: This survey was conducted online within the United States from March 8-10, 2016 among 2,015 adults ages 18 and older, among which 1,339 are pet owners who currently have a pet cat or dog or who had one within the past 5 years by Harris Poll on behalf of Tomlyn via its Quick Query omnibus product. Figures for age, sex, race/ethnicity, education, region and household income were weighted where necessary to bring them into line with their actual proportions in the population. Propensity score weighting was used to adjust for respondents’ propensity to be online.