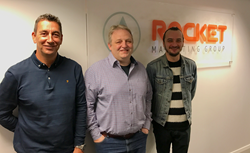 The Rocket Marketing Group the leading multi-channel retail loyalty consultancy, today announced that Bob Salmasi is joining the group as Head of Loyalty Solutions in order to broaden the group’s loyalty, reward and incentive offering across consumer, employee and channel marketing sectors.

As an industry veteran and strategic innovator, Salmasi has developed a reputation for successfully developing and expanding the proposition of a number of leading loyalty companies, particularly from a rewards and incentive offering.

As part of this expansion programme, Rocket have also appointed travel, leisure and lifestyle product specialist Paul Buckle. Salmasi and Buckle worked together at Grass Roots where they won and launched a number of high profile and long running consumer loyalty programmes for clients such as; Aviva, Arla Foods, Nestlé, Vodafone, HSBC and McDonald’s Restaurants. In addition, they also won and delivered the award winning Club Lloyds and Nationwide FlexOne Cinema programmes.

Bob will head the expansion of this new division within the agency to create a planning led, creatively driven product and partnerships team that will focus on delivering new and innovative solutions across all aspects of travel, leisure and lifestyle related rewards. He will report to Andy Huggins, CEO and Founder, Rocket Marketing Group.

“It’s fantastic to have such a passionate and experienced creative thinker like Bob joining our team,” states Huggins. “His positive and enthusiastic approach coupled with his vast experience of consumer loyalty and promotional marketing, makes him absolutely the right person at the right time to come on-board and work with the existing management team to achieve our future growth and expansion plans.”

Salmasi is equally enthusiastic to be on board:
“It is both exciting and refreshing to join a company that has a completely unique set of loyalty solutions and programmes in the marketplace. I’m really looking forward to working with the team to adapt these highly successful models in order to launch them in other sectors, whilst devising new reward strategies to implement through existing channels and client programmes.

Founded in 2001, Rocket Marketing Group has grown to be the UK’s leading multi-channel retail agency specialising in the creation, development and management of a variety of different added value club propositions, reward programmes and customer loyalty programmes.