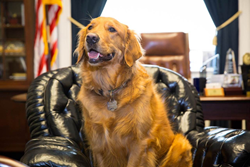 Members of Congress have been bringing pets to work since the nation’s founding. A new survey confirms that Capitol Hill remains a very pet-friendly workplace today, with a solid majority of House and Senate offices who responded to the survey saying they welcome pets at work on the Hill.

The survey included in-person interviews in House and Senate offices during August 2017 and was sponsored by Nestlé Purina PetCare and conducted on behalf of the Human Animal Bond Research Institute (HABRI), to call attention to the benefits of pet-friendly workplaces. The Hill survey findings paint a picture of a very pet-friendly workplace:

“The bond we share with pets is something we can all agree on,” said Dr. Kurt Venator, DVM, Ph.D., and Chief Veterinary Officer at Purina. “We’ve been bringing our own dogs and cats with us to work for decades because we believe life is better with pets. We know that pets help us de-stress, lower blood pressure, get our exercise, and even forge stronger social connections.”

Steven Feldman, Executive Director of HABRI, agrees: “Scientific research shows that pets in the workplace can boost productivity, collaboration, and employee satisfaction,” said Feldman. “We hope that more companies and workplaces will follow the lead of Congress to begin to think about pets as a way to boost employee health and wellness.”

Pets have had a presence in Congress from the beginning. In a recent interview, the Assistant Senate Historian, Dan Holt, said senators used to bring their hunting dogs into the Old Senate Chamber — to sit right by their feet during floor debates. Circa 1800, congressional rules were enacted to prohibit pets on the Chamber floors. Congressional rules, however, permit pets nearly everywhere else on Capitol Hill, and staffers are almost universally aware that pets are permitted throughout congressional buildings, with few limitations.

The rich tradition of pets on Capitol Hill continues through today. According to Congressional historians and media reports:

On October 4, 2017, HABRI and the Pet Leadership Council will bring the pet care community together to celebrate Pet Night on Capitol Hill. The event will include therapy animals and treat stations (for pets and humans). For more information, please visit http://www.petnight.com.

“Purina actively supports pets at work, pets in hospitals and pets in domestic violence shelters,” added Dr. Venator. “We also support legislation that helps keep pets and people together, including the Pet and Women Safety (PAWS) Act (H.R. 909, S. 322), and hope that this survey and Pet Night on Capitol Hill will help remind policymakers and the public about the importance of pets in our lives.”

About HABRI
HABRI is a not-for-profit organization that maintains the world’s largest online library of human-animal bond research and information; funds innovative research projects to scientifically document the health benefits of companion animals; and informs the public about human-animal bond research and the beneficial role of companion animals in society. For more information, please visit http://www.habri.org.