Portable, plug-and-play CubiOne has the same look, print qualities, but offered at an “eco-friendlier” price point 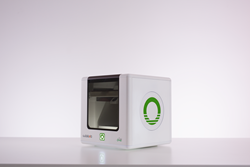 By offering CubiOne, we're giving even more people the freedom to create their designs whether they’re already 3D printer pros or if they’re completely new to 3D printing.

Creators of the Cubibot, the world’s most compact 3D printer with cloud-printing capabilities, heated bed and a host of other features, has introduced the CubiOne as a Kickstarter Special – priced at only $149.

“As a special reward to the crowdfunding community, we wanted to introduce the CubiOne, an entry-level 3D Printer that has the same look and print quality as Cubibot but is offered at an eco-friendlier price point,” said Cubibot Co-founder Aria Noorazar. “CubiOne is the perfect choice for people who want to purchase their first 3D Printer.”

Noorazar adds that the CubiOne is “truly offered at a Kickstarter Special Price,” which represents a 50 percent discount off retail pricing.”

The CubiOne is the same size as Cubibot (10x10x10 inches), produces the same maximum print size (5x5x5 inches), but is only designed to use the PLA and Specialty PLA print material. It also shares other features including filtered ventilation, dynamic design and a cloud-based library.

“By offering CubiOne, we're giving even more people the freedom to create their designs whether they’re already 3D printer pros or if they’re completely new to 3D printing,” Noorazar said.

The CubiOne also has a built-in, filtered ventilation system, a critical feature that many consumer 3D printers lack, which make it a safer 3D printer than non-filtered 3D printer. Users also have the option of disabling Cubibot’s heated bed at a click of a button.

To purchase CubiOne or Cubibot, which are both available at early-bird discounts during crowdfunding, visit the Cubibot Campaign Page on Kickstarter.