City traffic and road noise were spoiling the tranquility the visitors were seeking at The Botanic Garden at Georgia Southern University. The organization found a solution to the constant noise by installing Acoustifence, an outdoor noise reducing barrier from Acoustiblok, a NASA “Spinoff" listed manufacturer and industry leader of noise control products. 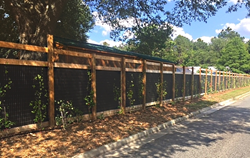 Fence alongside road was installed and treated with Acoustifence to reduce traffic noise.

“We are very pleased with the results. Both staff and visitors have commented on how much quieter and more tranquil it is," said Carolyn Altman, the Director of The Botanic Garden at Georgia Southern University

City traffic and road noise were spoiling the tranquility the visitors were seeking at The Botanic Garden at Georgia Southern University. The organization found a solution to the constant noise by installing an outdoor noise reducing barrier from Acoustiblok, a NASA “Spinoff" listed manufacturer and industry leader of noise control products.

Located in Statesboro Georgia, The Botanic Garden contains over eleven acres of distinctive gardens on the former farm and homestead of Dan and Catharine Bland. The grounds include trails, paths and courtyards as well as native and heritage plants of the southeastern coastal plains including over 20 of the state’s protected species. Structures for visitation include a complex of early 20th century farm buildings and the Rural Life Museum.

The Garden is also a research and educational resource for faculty and students and provides undergraduate and graduate programs, projects, and internships as well as continuing education programs for the community.

Sound Abatement Project Challenge
The neighborhood around The Garden has seen a significant increase in residential homes and with that a noticeable increase in noise. Road traffic on the four-lane state road just outside the gates also continued to increase over the years. This steady background noise began to disturb visitors who came to the location to enjoy peace and serenity. The organization’s “Lunch and Learn” programs were particularly affected by the disturbance (honking horns, revving engines, emergency vehicles and loud traffic).

Sound pressure is measured in decibels. A normal conversation is at around 60 decibels and not loud enough to be annoying or harmful. Once a sound reaches 85 decibels or higher (lawnmower, pump, motorcycle, emergency vehicles, leaf blower) it can cause permanent damage to a person’s hearing with prolonged exposure.

Even sustained exposure to daytime road noise, spending too much time on a noisy freeway or living close to high traffic areas according to current research is harmful to your health. Long term exposure to even moderate road noise can cause an increase in blood pressure, elevated cortisol levels and an increased risk of death from ischemic heart disease in the elderly. Overall, this type of prolonged exposure may shorten your life.

Animal and plant life may also be affected by the clamor. Excessive noise can disturb and alter the behavior of birds (locating mates, finding food, finding each other, and dodging or avoiding predators) as well as changes in frogs, bats and other animal’s behavior. These changes can have flow-on effects for entire ecosystems (for instance, plants that depend on birds or insects to spread their pollen and/or seeds) may be disrupted.

Acoustifence Installation
The Botanic Garden wanted to keep with the beauty and tranquility of the park atmosphere so the crew came up with a simple and very attractive alternative to attaching the material to a chain link fence. They attached the Acoustifence material to a wooden fence and covered the material with wire mesh; no special tools were needed. The Acoustifence was attached in long runs, interrupted periodically by a gate (also treated with Acoustifence) or a building (see photos). The height of the fence is seven and half feet and it will ultimately run the entire perimeter of the eleven acre garden.

Since the installation of the fence, Carolyn Altman, the Director of The Botanic Garden at Georgia Southern University said, “We are very pleased with the results. Both staff and visitors have commented on how much quieter and more tranquil it is. The fence is very durable as well. About two weeks after we installed the fence Hurricane Matthew came through and we had no damage at all! This is an outstanding product. This year the fence was unaffected by the high winds of Hurricane Irma.”

Not surprisingly, numerous studies indicate spending time in a natural setting such as The Botanic Garden actually contribute to one’s overall well-being by lowering blood pressure, stress levels and the risk of depression.

Lahnie Johnson, President and Founder of Acoustiblok said, “We are very pleased the installation of Acoustifence brought the peace and tranquility to the grounds the Botanic Garden was looking for. Noise pollution, particularly road noise, is a growing problem globally and Acoustifence meets all the criteria today’s businesses are looking for.”

Acoustiblok Inc. has been in business for over 20 years and ships products to more than 50 countries through a network of stocking distributors in the United States, on five continents across the globe. http://www.acoustiblok.com

New fence installation from inside the Botanic Garden.

Closeup of fence; vines planted will eventually grow up and cover fence. Gate was also treated with Acoustifence.