According to court documents, The Leader's Institute, LLC Accuses Non-Profit, Together We Rise, of Trademark Infringement and Unjust Enrichment 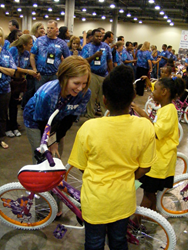 We have to be very diligent to protect the Build-A-Bike ® trademark from infringement.”

The Leader’s Institute ® has offered the Build-A-Bike ® bicycle building team activity since 2005, and the company owner, Doug Staneart applied for and received a Federal Trademark for the name in 2006. The Build-A-Bike ® team activity is a workshop where corporate teams work together to build bicycles for underprivileged kids in their local area. “It’s been the most popular team building activity that we offer for over a decade, because it is so much fun, and it also helps kids in the community,” said Staneart. “For most training opportunities, we look for a win-win scenario, but with Build-A-Bike ®, it’s a Win-Win-Win, because the companies that we work with gain better teamwork, the participants learn new team building skills, and the local communities receive a welcomed donation.”

“We work with over 400 of the Fortune 500 companies,” said Staneart, “and they recognize the Build-A-Bike ® event as a specific activity that combines a quality learning experience with a charitable donation to charity. So, we have to be very diligent to protect the trademark from infringement.”

Together We Rise Corporation also provides a bike donation that they call Build-A-Bike. According to court records, TWR began offering their “Build-A-Bike Tour” donation as a team building activity to the corporations in 2015 via their website http://www.togetherwerise.org. The TWR website shows that donations to the organization increased from $292,762 in 2014 to $5,098,435 in 2015.

Court records also show that TLI sent a cease and desist letter to TWR in May of 2016, August of 2016, and September of 2017 informing TWR of the potential trademark infringement. In addition, court records show that Together We Rise Corporation responded to The Leader’s Institute, LLC request in June of 2016 and September of 2017 refusing to stop using the Build-A-Bike mark in their advertising.

The Leader’s Institute, LLC filed the trademark infringement lawsuit against Together We Rise Corporation in US District Court two weeks later.