Airline’s A321’s maiden flight arrives in Toluca, Mexico from Hamburg, Germany with more than six tons of relief supplies for victims of the recent, deadly earthquakes. 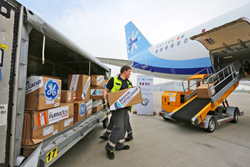 Interjet Airlines announced today it has added another Airbus A321 to its fleet, and as part of its maiden voyage to Toluca, Mexico, the aircraft delivered much-needed humanitarian supplies from Europe to the earthquake victims in Mexico.

"The arrival of our newest aircraft is truly a special delivery, because while it will allow us to offer more options for our customers, it also allows us the opportunity to make an immediate impact in the humanitarian effort to bring critical relief supplies and aid to the people who have suffered through one of the deadliest earthquakes in Mexico in the last 30 years," said José Luis Garza, Interjet’s Chief Executive Officer. "Through these tragedies, we have seen the global community come together with great strength to help out our victims of these recent natural disasters and we’re happy Interjet could help," he added.

The new A321 left the Airbus facilities in Hamburg, Germany carrying tents, inflatable mattresses, hammers, camping lamps, and waterproof tarpaulins. The Airbus Foundation, with the support of Aviation Capital Group, and GE Aviation/CFM, contributed to the delivery of the supplies, which were donated by Humedica, a non-governmental, German organization.

With the addition of this newest aircraft, the Interjet fleet grows to a total of 77 aircraft. The A321 is the largest aircraft of the A320 family, but also offers the lowest fuel consumption, emissions, and noise levels of its kind.

The new Interjet A321 is configured for 192 seats and passengers can enjoy Interjet’s unique brand of lower fares with free checked bags using their Priority fare, more legroom between seats and great service that has been embraced everywhere they fly. To learn more about Interjet’s service or make a reservation, visit http://www.interjet.com.