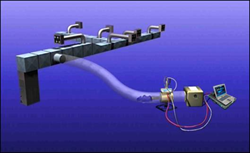 It seems a bit like magic when you watch the aerosealing process.

At the heart of the building’s unique Passive House design is an HVAC system designed to provide exceptional comfort and indoor air quality for a fraction of the residents’ usual energy costs. The engineer’s responsible for the design of the mechanical system specified the use of aeroseal technology from the start.

“To achieve Passive House standards, it’s important to have an extremely tight building envelope, and that requires an energy efficient way to bring fresh air to all the living spaces while exhausting air from kitchens and bathrooms,” said Julie Janiski, project manager at BuroHappold Engineering, the Structure/MEP/Lighting Design engineers on the project. “All that required a lot of ductwork delivering air at very low CFM (cubic feet of air per minute). This meant that the ducts had to be tighter than traditional manual sealing typically provides, in order to ensure that those low CFM targets were fully delivered to the living spaces.”

To ensure the duct tightness necessary for proper system functioning, the sealing experts at Taitem Engineering were brought in to seal the entire duct system using aeroseal duct sealing technology.

Unlike traditional duct sealing, aeroseal works from the inside of the ducts to seal leaks. The sealing equipment is connected to the ductwork via a long flexible tube and sealant is blown into the duct interior, where it automatically locates and seals the leaks.

“We divided and sealed the ductwork one section at a time,” said Evan Hallas, operations manager, Taitem Engineering. “The computerized Aeroseal system measures results as the sealant is being applied, so we knew the results were impressive before we were even done.”

It took Taitem Engineering’s three-man crew just eight days to tightly seal the building’s complete duct system, including more than 55 vertical risers running the height of the building, plus hundreds of horizontal runners branching from the risers to each individual room, kitchen and bathroom in the 350-unit apartment building.

The final testing showed that the aeroseal technology reduced leakage by an average of 98% with final leakage rates under 1% - well within engineering specifications.

“It seems a bit like magic when you watch the aerosealing process,” said Ryan Lobello of Handel Architects, the architectural firm on the project. “The report generated by the sealing system gives an equivalent hole size for the amount of remaining leakage, and it was so small we couldn’t even really draw a representation of it.”

“There was skepticism from those who were concerned that such a large duct system running at such a low flow rate could ever get the required amount of CFM from the rooftop fans down to the bottom floors,” said Hallas. “But they are now believers, and aeroseal is the key that made it work.”

For more information on Aeroseal or its use on the Cornell Tech Passive House, visit http://www.aeroseal.com or call (937) 428-9300.