Next Generation Sequencing: Clearing a bioinformatics pathway to personalized medicine 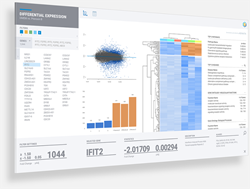 BioInformatics (the analysis of genomic data) is often cited as the major bottleneck for progress and growth in Precision Medicine, Drug Development and Agri-Genomics. With only 15,000 bioinformaticians globally, there isn't enough support for over 2,000,000 researchers demanding data processing to advance these important industries.

At two industry conferences during the month of October, OnRamp Bioinformatics (https://www.onramp.bio/) is unveiling a possible solution to this big problem.

OnRamp met with researchers in the genomics space at the Festival of Genomics in Boston earlier this month and will be meeting with still more at the 67th Annual Meeting of the American Society of Human Genetics (October 17-21), taking place in Orlando to demonstrate the self-guided nature of their genomic analysis solution.

The American Society of Human Genetics (ASHG), founded in 1948, is one of the leading organizations for human genetics specialists worldwide. Their membership includes thousands of researchers, academicians, clinicians, laboratory practice professionals, and others in the field of human genetics at universities, hospitals, institutes, and medical and research laboratories. The ASHG annual meeting will feature the latest developments in genomic research and technology, presented by leading scientists and researchers.

In Boston, OnRamp CEO & President Tim Wesselman delivered a talk entitled ‘Analyze Your Own Darn Data!’, which described how their new Rosalind™ platform enables life science researchers in their study of genomic data. Simplifying the user experience, OnRamp empowers today’s biologists to focus on their research, rather than which software tools to use. The Boston event represented OnRamp’s third appearance at the Festival of Genomics, running since 2015.

The talk extended upon Wesselman’s presentation at the Festival’s San Diego event in June of this year, which was the most attended keynote session of the weekend. Subtitled ‘The Next Era in Genomic Analysis is Simplicity,’ the presentation highlighted the challenges that stand in the way of mainstream adoption of genomics technologies in healthcare, drug discovery and agri-business and inferred that the future of precision medicine is dependent on empowering today’s life science researchers by de-skilling bioinformatics, reducing costs and dramatically accelerating results delivery.’

Rosalind™ is the first genomics analysis platform designed for biologists and researchers to analyze and interpret their own datasets.

The Festival of Genomics took place in Boston. Organized by Front Line Genomics, the event brought together more than 1200 professionals from healthcare, drug development and academia.

“The open and collaborative nature of the Festival creates opportunities for people to help drive the field forward and start making the promise of genomics in healthcare a much more concrete proposition for patients,” says Raj Dattani, of Front Line Genomics.

About OnRamp BioInformatics
Based in the Genomics Capital of San Diego, OnRamp BioInformatics provides software and systems to streamline and simplify the analysis, data management and storage of large-scale genomic datasets so that biologists, researchers and drug developers can harness the potential of DNA sequencing, while reducing costs and increasing productivity. OnRamp Bio’s solutions have been recognized as best practices for bioinformatics by Expert Review of Molecular Diagnostics. Follow us on Twitter (@OnRampBio) and Facebook, or visit us at http://www.onramp.bio

About Rosalind Franklin
British-born Rosalind Franklin (1920 – 1958) significantly advanced the understanding of X-ray crystallography and was instrumental in the discovery of the DNA double helix.